Johan 'Rassie' Erasmus hailed Munster's "commitment and guts" after his reign as the province's director of rugby began with a gritty 23-13 Pro12 defeat of Scarlets in Wales.

James Cronin and Ronan O'Mahony touched down to help the visitors carve out their first victory at Parc y Scarlets.

Munster appointed former Springbok Erasmus to the role back in April. After an opening win built on an impressive defensive display, the new man aired his satisfaction.

“If you can take something out of it it’s probably commitment and guts, which is sometimes something you can’t coach," he said.

"I think the guys today were solid. It was nice, but nobody thinks it was a perfect game.

“There were a lot of things I had to take and understand. We now know what we’re in for which is a really tough competition.

"As I said in the beginning when we come here and show guts, even if we lose sometimes but the guys try like that... that’s a positive."

Munster were guilty of errors in the line-outs and from their restarts, but they showed stirring hunger and commitment to the cause against a Scarlets outfit that had named 11 internationals in their 23-man squad.

The only drawback after a good day's work was a rib injury that forced Simon Zebo out of the action.

Erasmus expects him to miss next Friday night's meeting with Cardiff Blues in Cork.

“At this stage he’s a bit sore," said Erasmus. "In my experience if a guy comes off with ribs there’s not a good chance he’ll be playing the next game.

"I haven’t seen the scans, I’ll listen to what the doctor and physios say but I think if a guy comes off with ribs it must be pretty sore. It would be pretty incredible if he plays next week.

“If you can show your aggression within the system that’s the golden way. Tonight there was some times when we didn’t and most of the time we did so hopefully that’s the standard for the season. The guys stood tall." 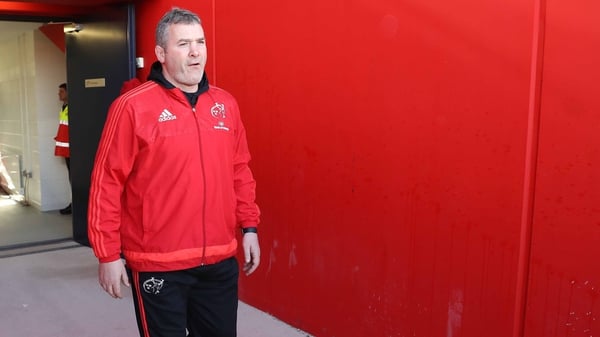