Connacht endured a nightmare start to their Guinness PRO12 title defence with a humbling 41-5 defeat to Glasgow Warriors at the Sportsground.

The Scots, who ended last season with back-to-back losses in Galway, laid the foundations for this excellent bonus-point win with two Tommy Seymour tries.

The Scotland winger finished crisply on 10 and 37 minutes, with Henry Pyrgos kicked a penalty in between. An unconverted Niyi Adeolokun effort provided Connacht's points at 13-5 down.

The defending champions' lack of pre-season fixtures - they only had one game away to Montpellier - was ruthlessly exposed by Glasgow, who dominated the second half, adding further touchdowns through man-of-the-match Stuart Hogg, Tim Swinson, Sila Puafisi and Sean Lamont on his 100th appearance for the club.

With 473 international caps in their squad and the early wind advantage, Gregor Townsend's side started strongly and centre Sam Johnson threatened on a half-break.

Adeolokun showed how dangerous he can be on Connacht's right wing, but Seymour managed to haul him down and, just moments later, he was celebrating the game's opening try. Quick hands from Peter Horne and Hogg put the Nashville-born flyer over in the left corner.

A well-timed lineout steal by Jonny Gray broke up a spell of Connacht pressure and Bundee Aki blundered when failing to put debutant full-back Cian Kelleher clear outside him. 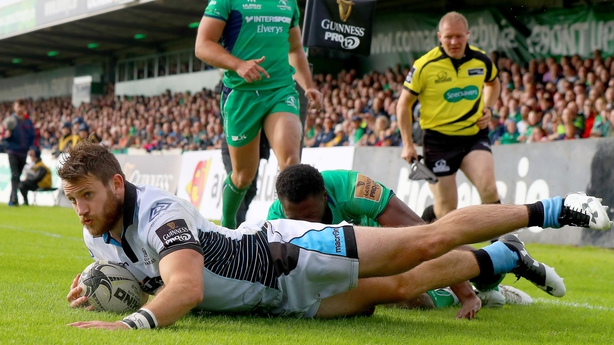 Glasgow co-captain Gray's industry at the breakdown teed up Pyrgos for a successful 25th-minute penalty, although number eight Ryan Wilson's late and dangerous tackle on Jack Carty had the visitors a man down.

It was Aki who provided the momentum for Connacht's opening score, the centre powering out of two attempted tackles before neat passes from Denis Buckley, Finlay Bealham and Eoin Griffin sent Adeolokun diving over by the right corner flag.

Carty was unable to convert and Glasgow had the last word before half-time. Hogg's flat delivery out to the right allowed Seymour to cut in past Kelleher and complete his brace.

Connacht's rustiness was obvious again when Hogg exploited a gap between Griffin and Matt Healy to reach over to the right of the posts, with Pyrgos' boot making it 20-5 barely six minutes after the restart.

The bonus point was bagged in the 53rd minute as second row Swinson piled over following good work by lively Italian newcomer Leonardo Sarto. The latter also had a hand in the build-up to Puafisi's score on the hour mark, the Tongan replacement prop crashing through after Hogg was held up by Kelleher.

Turnovers and dropped balls continued to frustrate the Irish province, who only had one home defeat during the entire 2015/16 season.

Lamont wrapped up the runaway victory in the 71st minute, scoring from a close-range ruck, with scrum-half Pyrgos slotting his fourth successful conversion in a row. 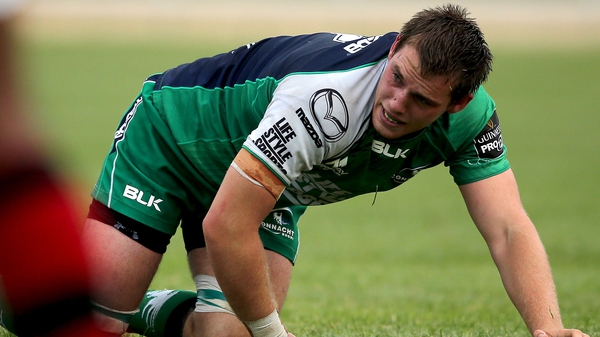