A strong defensive display earned Munster an opening Guinness Pro12 victory on the road over a disappointing Scarlets side.

Scarlets had much more of the possession and territory but Munster emerged winners by two tries to one at Parc y Scarlets - their first win in Llanelli in five years.

It was a first competitive win for the province’s new director of rugby Rassie Erasmus and the only negative to come out of Saturday’s game was a rib injury which forced Simon Zebo out of the action before the end. 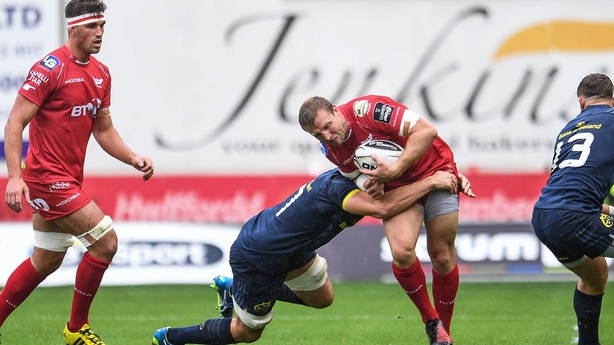 Patchell, South African prop Werner Kruger and 19-year-old number eight Josh Macleod all made their debut for Scarlets with Wales centre Jonathan Davies coming off the bench in the second half after rejoining the region from Clermont Auvergne.

In all Scarlets named 11 internationals in their 23-man squad.

Despite a wealth of possession for Scarlets and a lot of mistakes from Munster at line-outs and restarts, it was the Irish side who went in at half-time with a 17-10 lead.

Scarlets spent most of the first quarter in Munster's half but could not get on the scoreboard with Patchell missing an 11th minute penalty goal attempt.

Munster suffered a setback when Zebo was forced off with a rib injury but with their first visit into Scarlets' 22 they scored with Cronin getting the ball down under the posts for Bleyendaal to add the conversion.

Scarlets got some points on the board with a Patchell penalty on 27 minutes but three minutes later O'Mahony ran through a huge gap to claim Munster's second try. Bleyendaal's conversion made it 14-3 on the half-hour mark. 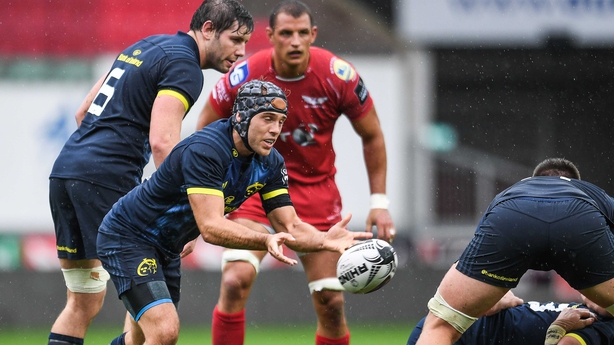 Scarlets needed something special to get back in the game and they got it with a quick tap penalty deep in his own half from Davies, who broke free, kicked ahead and reclaimed the ball to score the try, which was converted by Patchell.

But Munster had the final say of the half when Bleyendaal kicked a penalty two minutes before the break.

The New Zealander missed a relatively easy penalty attempt at the start of the second half, while Patchell found the target with his own penalty shot on 48 minutes to reduce the deficit to four points.

But Scarlets continued to have no answer to Munster's strong defensive effort and on 54 minutes Bleyendaal restored his side's seven-point lead with his second penalty kick.

And any chance Scarlets had of getting back in the game seemed to go when a Scarlets penalty was reversed after lock Lewis Rawlins dropped the shoulder at a ruck.

Keatley stepped up to kick the long range penalty to extent Munster's lead to 10 points.

In the final minute Patchell missed a penalty which if he had converted it would have earned Scarlets a bonus point. It was Scarlets' third successive home defeat after they lost their final two matches at Parc y Scarlets last season.