Ireland Under-20 coach Nigel Carolan believes his men have the ability to go all the way and be crowned world champions on Saturday.

England, who Ireland defeated in the Six Nations, stand in the way of a historic World Rugby Under-20 Championship crown, which scarcely seemed possible when they trailed 17-0 after just 20 minutes of their opening game of the tournament against Six Nations grand slam winners Wales.

But they recovered to win that one 26-25, then ousted reigning champions New Zealand before making 13 changes and taking care of Georgia.

Argentina were blown away in the opening half hour en route to a 37-7 triumph and now Carolan is looking for his side to go one big step further and beat an English side who hammered South Africa 39-17 in the other semi-final.

Two form teams will go head to head at the AJ Bell Stadium on Saturday evening (kick-off 7pm) but Carolan thinks that their display against Argentina can carry them forward.

“We needed to be good today and I thought we were superb," he said. "Even when we were 20 points up at half-time, the result of the senior game from Saturday was ringing in my ears.

“You can’t sit back and relax. But a great performance right through both from attack and defence. We even left some scores out there today. Top marks to all of the boys today, I thought they were superb."

His men, notoriously slow starters all season, were 21-0 in front after 29 minutes but there were some jitters when Argentina crossed just before the break.

“It was probably no harm for us that they did score, it kept us grounded. It meant at half-time that we had to focus on the things that we were doing well and keep that going for the second-half,” added Carolan. 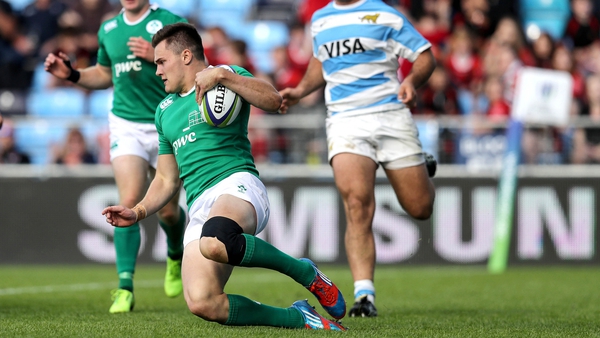