England's heroic defence propelled them to an historic series victory over one of the southern hemisphere giants as Australia were crushed 23-7 at AAMI Stadium.

The rivals fought each other to a standstill in an ugly but captivating second Test that was edged by the Grand Slam champions, who have climbed to second in the world rankings following their stirring rearguard action in Melbourne.

Captain Dylan Hartley, who became England's most capped hooker, crossed in the first half before Owen Farrell added the decisive try with six minutes remaining.

Australia had raced out of the blocks in the opening test at the Suncorp Stadium, but they made a shaky start second time out with Bernard Foley missing touch and Sekope Kepu penalised for a brainless shove on Maro Itoje at the line-out.

Owen Farrell was just short with his shot at goal before attention quickly turned to the dire state of the pitch when two mini craters appeared following successive scrums.

Just as Australia were building a head of steam in attack, a mass brawl erupted as Australia took exception to Chris Robshaw grabbing Nick Phipps around the neck and pulling him to the ground.

Surprisingly, referee Craig Joubert awarded a penalty against the hosts due to their skipper Stephen Moore diving in to join the fray.

England were able to ease out of their half and after using their forwards to make yards, they drove over from a five-metre line-out that ended with Hartley touching down.

The niggle continued into the second quarter with George Kruis exchanging words with Moore, who then drove into the side of Cole as the prop lay prone at the breakdown.

Pressure was building on the Australian defence and Cole was able to take revenge on the opposition front row by dominating James Slipper at the next scrum as the Wallabies were driven backwards.

Farrell kicked a penalty and England led 10-0, but they were also riding their luck with Joubert as they did everything possible to slow down Australia's ball while escaping any more serious punishment than a penalty.

The Wallabies went for touch and it was their turn to drive over from the line-out, Moore diving over for a try that was converted by Foley.

Once more Australia were building a head of steam and it took a key tackle from Mike Brown to keep out Scott Fardy.

A harebrained moment from Billy Vunipola then placed England under huge pressure, the number eight kicking the ball straight into touch thinking the first half was over only to discover to his horror that there were several seconds remaining.

Twenty-one phases of attack from the Wallabies followed before some desperate defending and a knock-on ended their assault.

The teams battered away at each other when play resumed and in another stroke of good fortune for England, Joubert penalised Foley for blocking Farrell even though the Wallabies playmaker had been shoved to the ground by his rival.

To rub salt into the wound, Farrell landed the penalty and when Australia pounded at the Red Rose whitewash Chris Robshaw produced a critical turnover.

The Wallabies pack celebrated wildly after crushing England at the scrum and once more they opted for the line-out over a shot at goal. This time the decision backfired as they produced the latest in a series of knock-ons.

England's defence had been outstanding but the highlight was possibly Maro Itoje stopping Toby Smith as Australia sought to exploit a three-man overlap.

An easy three points were declined by Foley as the Wallabies went for the line-out once more and it proved to be a poor call as when play broke down the omnipresent Robshaw was able to gather up a loose ball and kick to safety.

The rivals were exhausted and holes began to appear across the pitch, but it was England who had the greater strength on the bench and it was the arrival of two replacements that enabled them to score the decisive try.

Courtney Lawes found himself in acres of space and Jamie George continued the move, chipping ahead for Farrell to collect, touch down and then convert as the final act of a stunning victory. 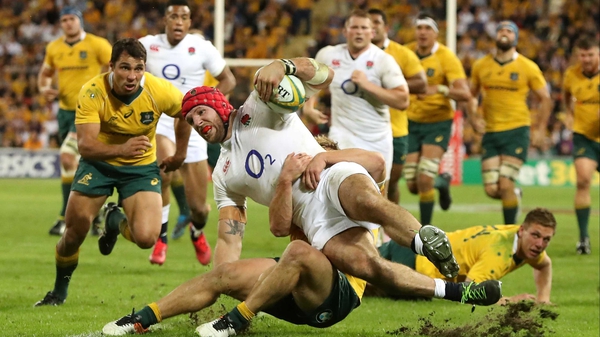 England see off Australia in first test in Brisbane