Max Deegan got the historic match-clinching try as the Ireland U-20s became the first Irish men’s rugby side ever to beat New Zealand in any age-group at the World Rugby U-20 Championships today.

It completes a fantastic week for Nigel Carolan’s men who backed up their impressive 26-25 victory over Grand Slam champions Wales with another awe inspiring win, this time over the reigning world champions at Manchester City Academy Stadium.

New Zealand had hammered Georgia 55-0 and scored nine tries in mid-week, but Ireland were an entirely different proposition, building on their 20-14 half-time lead to win quite comfortably in the end. Ireland will now reach the semi-finals if they defeat Georgia on Tuesday.

Ireland had to fight hard in the first-half when Adam McBurney was sent to the bin controversially in the 18th minute.

Bill Johnston kept Ireland ticking over, as he did against Wales, and his injury was another huge blow when he had to leave the field towards the end of the half, but at that stage Ireland had already built up a good lead.

It was Johnston who slotted their first penalty after just three minutes, when New Zealand were adjudged to have gone off their feet at the breakdown.

Jordie Barrett replied quickly though, and he showed his class when he darted through the Irish defence off a fantastic line from Sam Nock’s pass. He scored the easy conversion and New Zealand held a 7-3 lead after just eight minutes. 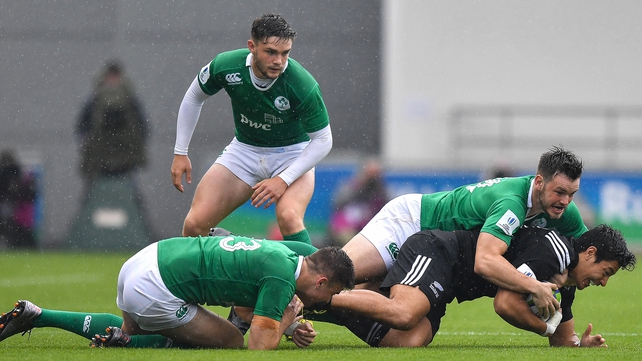 Other teams would have crumbled if they conceded a try early against the Baby Blacks but Ireland had four consecutive comeback victories under their belt.

Johnston scored his second penalty, this time a much easier effort after Ireland had gone close when they won a scrum penalty close to the New Zealand line.

But New Zealand were dangerous every time they got the ball in hand, especially in the wider channels. On one occasion McBurney was given a yellow card for knocking on deliberately with an over-lap out wide.

Then in the 25th minute Barrett was on hand to draw the cover and Shaun Stevenson made a scintillating break with a chip and chase before he finished under the posts.

It was another test for the Irish, they trailed 14-6 with McBurney still in the bin, but they answered it again in the form of a great try from Greg Jones.

They won a penalty that Johnston kicked to the corner and they drove the maul over with Jones emerging with the ball.

Johnston made no mistake with the conversion and five minutes later Ireland took the lead for the second time in the game when McBurney avenged his yellow card to crash over in the left corner.

It was off another line-out maul where McBurney peeled off the side and barrelled his way over.

Ireland led 20-14 at half-time and eight minutes into the second-half Johnny McPhillips sent over another penalty as Ireland took a comprehensive lead.

But New Zealand struck back through Malo Tuitama, he crossed for two tries, before Deegan gave the Irish some breathing room when he crossed with ten minutes left to play for a 30-19 lead.

The Kiwis hit back immediately through another Tuitama try, but Ireland re-grouped once more and McPhillips slotted another penalty following more good scrummaging by the pack to see the jubilant Irish home. 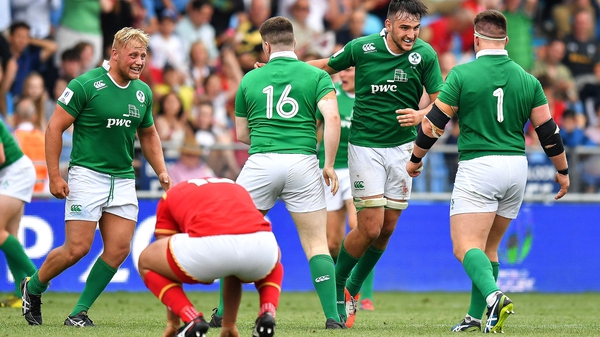 Ireland U20 set to face the world champions