Saracens became the first English club for 12 years to win a domestic and European double as they resisted a thrilling Exeter fightback to retain the Aviva Premiership title.

Not since Wasps in 2004 had the feat been achieved, but Saracens were in no mood to waste their opportunity before a 76,000 crowd in glorious Twickenham sunshine as they followed up victory over Champions Cup final opponents Racing 92 by defeating the Chiefs 28-20.

And it eventually took Saracens full-back Alex Goode's 76th-minute touchdown to calm the nerves, which finally finished Exeter and concluded a spectacular season.

Just two weeks after they were crowned European champions in Lyon - and then demolished Premiership play-off opponents Leicester seven days later - Saracens had no intention of switching off. 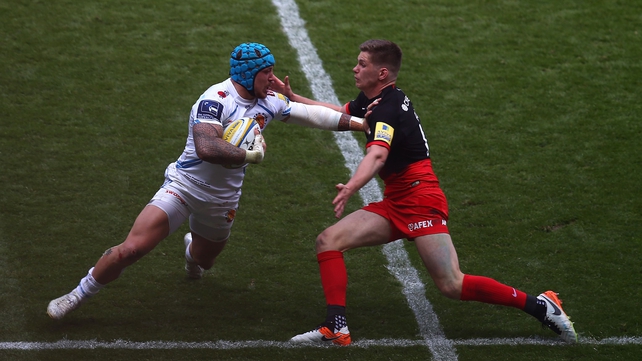 As against Racing 92 when Europe's premier prize was at stake earlier this month, Saracens were keen to exert a vice-like grip on their opponents, and there was no immediate suggestion of Exeter responding.

Steenson landed a 23rd-minute penalty for the Chiefs, but there was little to suggest that Exeter could find any meaningful way back into the contest, and Saracens then stepped up a gear by scoring 17 points in 11 minutes.

Saracens hooker Schalk Brits made a brilliant outside break that left the Exeter defence in tatters, before he found Wyles in support, and Taylor capitalised on a deft Farrell kick to cross unopposed.

Farrell's conversion made it 16-3, but there was worse to come for Exeter as they conceded a soft try through weak defensive work when full-back Phil Dollman and centre Henry Slade missed tackles and allowed Wyles an easy run-in.

Exeter head coach Rob Baxter's subdued expression in the stands said it all as Farrell added the conversion, before a second Steenson penalty reduced the arrears to 23-6, but the Chiefs were pretty much down and out.

Exeter showed much more purpose and penetration immediately after the restart, and they were undoubtedly helped by a an entire front-row substitution as Yeandle, Alec Hepburn and Tomas Francis joined the action, which helped give them much-needed impetus.

In terms of territory, it was Exeter's best spell of the game, and they were rewarded after Steenson sacrificed a kick at goal to go for the corner, which resulted in an attacking lineout and ended with Yeandle powering over.

Steenson added the conversion, which cut the gap to 10 points and provided Saracens with a gentle reminder that they needed to stay on top of things and rediscover their first-half supremacy.

Saracens, without rediscovering their first-half dominance, looked to have enough in the tank to close out the game and confirm their place at the head of English rugby's top table for a second successive season, but Exeter rallied again through a Nowell touchdown that was brilliantly delivered by the Chiefs' backs.

Steenson's conversion set up a grandstand finale, with just three points between the teams, before Premiership player of the season Goode came up trumps with a late touchdown, and Saracens could finally relax.