Ulster secured their place in the Guinness Pro12 play-offs with an entertaining 46-26 win against Ospreys at the Liberty Stadium.

The defeat means Ospreys fail to qualify for the European Champions Cup next season, while Ulster will now have to go to Leinster in the semi-final.

It is back to the drawing board for the Welsh side, who have never previously failed to qualify for the top tier of European competition.

But Ospreys were not able to carry on their late-season form which had seen them win their previous three matches with bonus points. Those victories had given them an outside chance of making the top six.

The Ulstermen deserved their 21-14 half-time lead scoring three tries to two despite Ospreys having been awarded 10 penalties to Ulster's nil.

Ospreys made their intentions known from the start by turning down kickable penalties in the pursuit for tries and the hope of a bonus-point victory.

And after 12 minutes the plan was going well when Biggar went over the posts from a scrum to convert his own try.

But Ospreys found themselves getting turned over too much in Ulster's 22 and it was the visitors who struck with two tries in the space of 10 minutes.

Both scores came from scrums as Jackson was put over by full-back Jared Payne before skipper Best went in from 10 metres out. Jackson converted both scores as Ulster led 14-7 on 27 minutes.

But the home side got back on level terms when Matavesi reached out to score after the Welsh side ran a penalty. Biggar converted.

It looked like the half would end 14-14 but a poor kick ahead by Rhys Webb was returned by Trimble and he got lucky with the bounce from his chip ahead to run in a final minute try. Jackson put over his third conversion.

It took until only the second minute of the second half for Ulster to open up a 10-point lead when Jackson converted their first penalty of the match.

The Ospreys did respond with an attack inspired by replacement Olly Cracknell but again they were guilty of turning over ball in Ulster's 22.

On 56 minutes Henry scored an opportunist try by touching the ball down when it squeezed out of a ruck to give Ulster the bonus-point try.

It was a controversial moment with the home crowd not liking the decision after Television Match Official Derek Bevan advised referee Marius Mitrea he could award the try. Jackson converted the try and then kicked a penalty as Ulster led 34-14 in the 60th minute.

Ospreys scored a third try when Grabham went over in the right corner. Biggar missed the conversion.

But three minutes later replacement Olding was put over under the posts for Jackson to add his fifth consecutive conversion.

Five minutes from time Grabham went over for his second and Ospreys' bonus point try but it was too little too late.

And before the end van der Merwe crashed over for try number six, but Jackson missed the conversion. 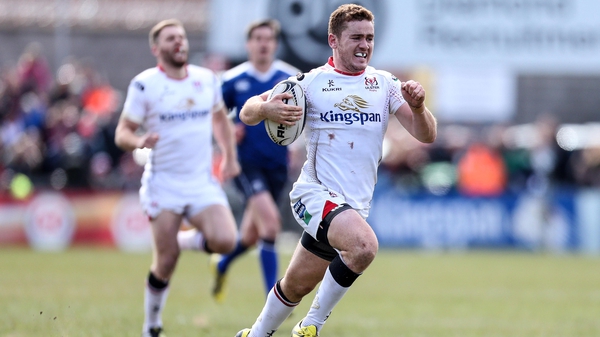 As it happened: Ulster v Leinster