Division 1A table-toppers Clontarf ran in four tries to see off the semi-final challenge of UCD 24-10 and move a step closer to their second Ulster Bank League crown in three years.

Beaten finalists last season, 'Tarf look well placed to go one better when they meet Cork Constitution at the Aviva Stadium on Sunday, 8 May, and they were helped on their way this afternoon by early tries from Leinster-capped duo Bryan Byrne and Mick McGrath.

Playing on the all-weather surface at Castle Avenue, the north Dubliners broke then deadlock in the eighth minute when hooker Byrne barged his way over to finish off a strong spell of carrying from the home forwards.

The backs followed suit three minutes later, fast-breaking out-half Joey Carbery launching a sublime move that ended with McGrath going over in the left corner for his 14th try of the campaign.

Both of the scores were unconverted, though, and UCD were within a converted try by half-time, trailing 10-3 after number 10 Ross Byrne was successful with the first of two penalty attempts.

The students did stretch the home defence, missing out on a try due to a forward pass from Barry Daly and they also failed to turn two late breaks from winger Daly and prop Andrew Porter into points.

However, approaching the hour mark, 'Tarf grabbed their third try when powerful flanker Michael Noone held off a number of challenges to score on the right. The excellent Carbery added the extras to make it 17-3.

The margin was back down to seven points after Daly touched down with 16 minutes remaining, profiting from some exceptional approach work by captain Emmet MacMahon. Byrne's impressive conversion from out wide kept Noel McNamara's youngsters in the hunt.

But, despite losing openside Karl Moran to the sin-bin, 'Tarf maintained their lead. UCD turned down two kickable shots as Byrne went for touch instead, and the well-organised home defence eventually stood firm.

'Tarf replacement Evan Ryan, himself a former league-winning captain with Cork Con, sealed the visitors' fate when racing in under the posts in injury-time. 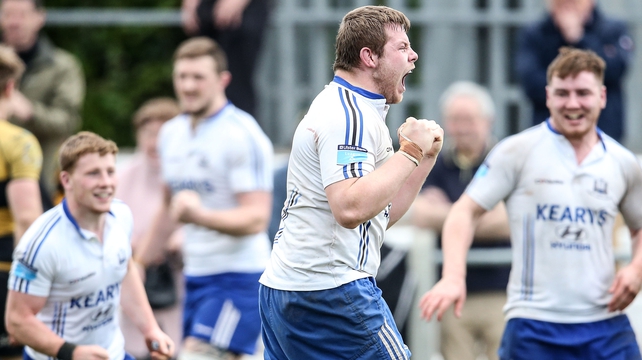 Cork Constitution will contest two All-Ireland senior finals in the coming weeks after a late brace of tries saw them edge out Young Munster 22-16 in today's Division 1A semi-final.

Cork Con, who travel to Galwegians in next Saturday's Bateman Cup final, booked their place in the Ulster Bank League decider against Clontarf next month with a storming finish at Temple Hill.

Centre Niall Kenneally's sixth-minute try, in response to an earlier penalty from Gearoid Lyons, had Constitution leading the Cookies 7-3 at half-time.

But this error-strewn encounter turned in Young Munster's favour as goal-kicking centre Lyons landed two more penalties and helped to set up a breakaway try for full-back Craig O'Hanlon.

Con were leading 10-9 but had hooker Max Abbott in the sin-bin when Ireland Sevens international Lyons burst clear from his 22 and made a full 60 metres. Munsters retained possession and managed to put O'Hanlon over in the corner, with Lyons' crisp conversion making it 16-10 on the 70-minute mark.

However, the travelling support cruelly had to endure semi-final heartbreak for the second successive season as a combination of Constitution composure and Munsters indiscipline saw the hosts prevail.

With Sean Duggan already binned for collapsing a maul a few minutes earlier, Munsters went down to 13 men after a second straight scrum infringement and then a third such offence saw referee Gary Conway award an 80th minute penalty try to Constitution.

Tomas Quinlan tapped over the conversion for a 17-16 scoreline and Brian Hickey's men made certain of their final place with an injury-time try from powerful runner Kenneally, who followed up on an initial break from winger Aaron Spring.

Ballynahinch are just 80 minutes away from staying up in Ulster Bank League Division 1A after powering past Buccaneers 41-19.

A superior second half display saw 'Hinch book their place in next Saturday's relegation/promotion play-off final where they will have home advantage against Dublin University, the runners-up in Division 1B.

In between, Ballynahinch scrum half Aaron Cairns nipped over for his sixth try of the campaign, and a 10-point surge approaching half-time had the hosts leading 17-14. Full-back Justin Rea landed a penalty and converted out-half Sam Windsor's smartly-taken chip-and-collect score to give Derek Suffern's side a slender advantage.

Buccs fell further behind when Rea tagged on another penalty and converted flanker Conor Joyce's try which came when the Pirates were down to 14 men.

A sharp break from Windsor helped to set up former Ireland Under-20 international David Busby's try and after the pacey O'Reilly completed his hat-trick for the midlanders, hooker Jonny Murphy bagged 'Hinch's fifth converted try of the day. 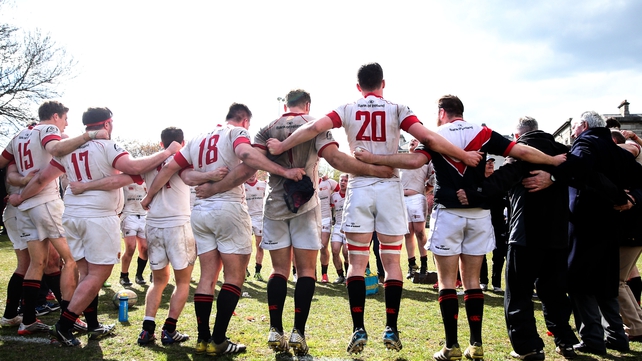 Dublin University will make the trip north to take on Ballynahinch next weekend after running out 25-20 winners over Ballymena at College Park.

Trinity out-half Jack McDermott has emerged as the top points scorer across the Ulster Bank League's top two tiers in 2015/16, and he took his tally to 190 points with four important kicks this afternoon.

He kicked the opening points from an early scrum penalty to set the students on their way to a 15-10 interval lead, with full-back Conor Kearns squeezing over in the corner for their opening try.

Although winger Max McFarland profited for an overlap for a well-taken second score, resilient Ballymena quickly hit back with a converted effort from Ulster hooker John Andrew.

An Andrew Magrath penalty cut the gap to five points and into the second period, influential lock Connor Smyth forced his way over to tie things up at 15-all.

However, Ballymena lost their discipline at a crucial stage with two sin-binnings in quick succession, as a McDermott penalty put Trinity back in front.

Second row Raef Tyrrell then muscled his way over for the hosts' third touchdown before he too saw yellow, and a quick tap allowed Clive Ross to cross for the Braidmen from close range.

It was end-to-end stuff in a gripping conclusion, but Tony Smeeth's young side showed impressive composure to hold on and advance to a winner-takes-all clash with 'Hinch.