Connacht completed their first-ever season's double over Munster with a brilliant 35-14 Guinness Pro12 bonus-point win at the Sportsground.

A week on from their exit from Europe, Pat Lam's second-placed side are now on the cusp of a home league semi-final, while Munster, who face a fight for Champions Cup qualification, lie a distant seventh.

The visitors were in clinical form early on as tries from Simon Zebo and Mike Sherry opened up a 14-6 lead, but yellow cards for James Cronin and Billy Holland were ruthlessly punished by Connacht nearing half-time.

Niyi Adeolokun darted clear to make it a one-point game and with Holland seeing yellow for not rolling away close to his try-line, the Munster scrum crumpled for a penalty try and a 20-14 turnaround.

The westerners ended up scoring 29 points without reply, Adeolokun completing his brace and recent Ireland debutant Finlay Bealham nabbing his first senior try for the province. An injury-time penalty from Shane O'Leary topped off his 15-point contribution.

The only concerns for Connacht coming out of this derby success were second-half injuries picked up by man-of-the-match Bundee Aki (knee) and Bealham (jaw).

This weekend's results mean Leinster, Connacht and Glasgow Warriors have secured their places in the 2016/17 Champions Cup. 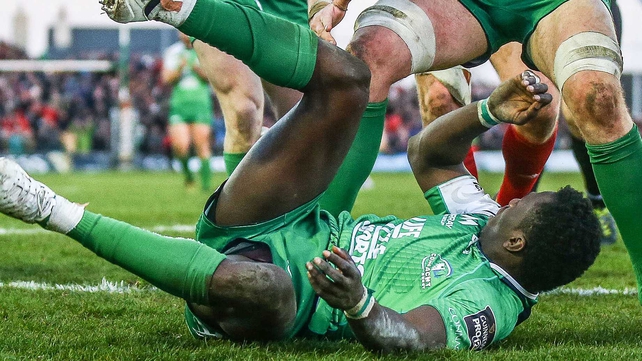 The fast-breaking Zebo gave a glimpse of his attacking abilities in the opening exchanges, but O'Leary put the hosts in front with a well-struck penalty.

O'Leary's blushes were spared when Adeolokun dotted down for a 22-metre drop-out after Conor Murray had blocked the Connacht fly-half's attempted clearance.

But the home side's lead was short-lived, a neat break from Johnny Holland and offload from Jack O'Donoghue allowing Zebo to evade a tackle from his Ireland colleague Robbie Henshaw and score to the right of the posts. Holland added the conversion.

O'Leary clawed back three points towards the end of the first quarter, punishing Munster for hands in the ruck, but after Keith Earls had gone close from a Zebo cross-field kick, hooker Sherry rumbled over from a textbook lineout maul.

Although Holland brilliantly added the extras from wide on the right, it was Connacht who seized control approaching the interval.

Munster loosehead Cronin was binned for repeated scrum infringements on the half-hour-mark and Aki, who had almost put Kieran Marmion away in a previous attack, linked with Bealham to send try-scorer Adeolokun over from 22 metres out. 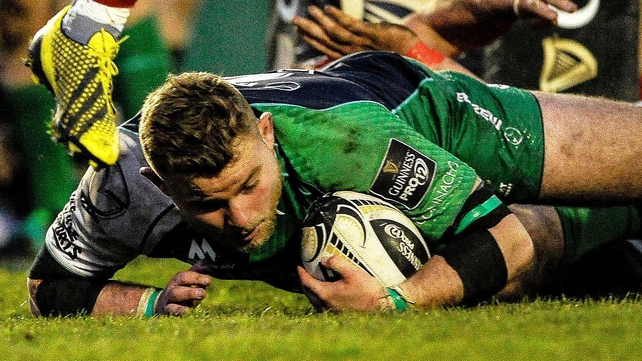 A tremendous break from deep by the increasingly threatening Aki saw Connacht end the half on the front foot, a well-timed scrum shove forcing the penalty try with O'Leary tagging on his second conversion.

Into the second half, Munster's early attempts to build pressure in scoring range were foiled by well-won ruck penalties by Henshaw and Denis Buckley.

It was Henshaw who provided the assist for Adeolokun's 54th-minute unconverted effort, the full-back's grubber kick evading Darren Sweetnam's grasp and Adeolokun was on hand to finish off.

Munster hunted for a response, Francis Saili agonisingly knocking on as he attempted to acrobatically score from a Murray pass. An Aki-led breakout also resulted in a fumble, but Connacht won a subsequent scrum and soon claimed their bonus point in devastating fashion.

Ultan Dillane, who impressed throughout, made a powerful surge for the line and although Eoin McKeon was also stopped short, Marmion swiftly fed prop Bealham to barge in under the posts. O'Leary converted to open up an 18-point gap.

Uncharacteristic errors from Zebo and replacement Ian Keatley summed up a forgettable night for Munster and O'Leary pocketed three more points with the final kick, as Connacht joined league leaders Leinster on 68 points. 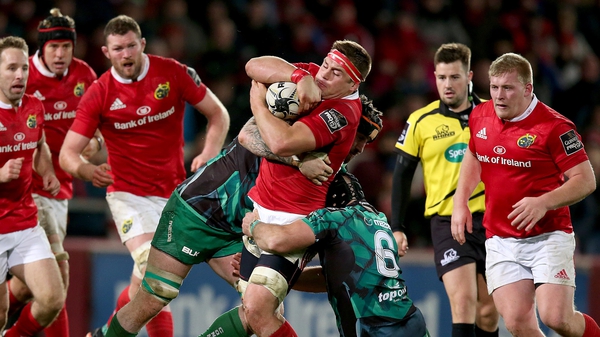