Ballynahinch's nine-try 59-5 demolition of Garryowen saw them complete the first part of a possible great escape.

For much of the season 'Hinch had looked destined for automatic relegation, but Saturday's rousing bonus-point success at Ballymacarn Park - coupled with Galwegians' 26-16 loss at Cork Constitution - means it is the Galway club who finish bottom of the table.

Their ninth-place finish means the Co Down side can breathe a temporary sigh of relief, however they still have plenty of work to do in order to preserve their top flight status.

The newly-expanded relegation/promotion play-offs mean 'Hinch must beat Buccaneers, the fourth-placed team from Division 1B, next Saturday and then overcome the winners of Dublin University v Ballymena to remain a Division 1A club.

'Hinch's mission to squeeze past 'Wegians on scoring difference looked a long way off at half-time when they led Garryowen by just 14 points.

However, Derek Suffern's men - inspired by Ulster's Sam Windsor and Ireland Sevens international Aaron Cairns at half-back - went up through the gears to take advantage of three Garryowen yellow cards in the second half.

They had a -44 points differential to erase and with 'Wegians losing their grip on a 16-12 lead in Cork, 'Hinch coasted to victory as Cairns (2), Lorcan Dow, Jonny Simpson, Craig Trenier, Windsor, Zack McCall and Davy Nicholson all crossed the whitewash, in addition to a penalty try.

Galwegians suffered automatic relegation at the hands of Cork Constitution as they leaked two late tries in a tense 26-16 defeat at Temple Hill.

Matt Brown's men needed a final day win to stay above bottom side Ballynahinch in the Division 1A standings, but they endured a nightmare finish as nine-try 'Hinch leapfrogged above them in dramatic fashion.

Winger Cormac Brennan's 58th-minute try gave 'Wegians renewed hope as they edged into a 16-12 lead, however the subsequent sin-binning of number 8 Anthony Ryan had them under serious pressure.

Although already assured of their place in next week's semi-finals, Cork Con were still fighting for home advantage in the play-offs and a late surge against their relegation-threatened opponents earned them just that.

Brian Hickey's side will host Young Munster next Saturday after centre Niall Kenneally (74 minutes) and in-form winger Aaron Spring, who ran in an intercept effort for his fifth try in as many games, struck in the closing stages.

The bonus point saw Con pip Munsters to second place, while 'Wegians' worst fears were confirmed when news filtered through of Ballynahinch's 54-point thrashing of Garryowen. Their league campaign may be over, but Brown's charges still have a shot at silverware against Con in the Bateman Cup final on Saturday, April 30. 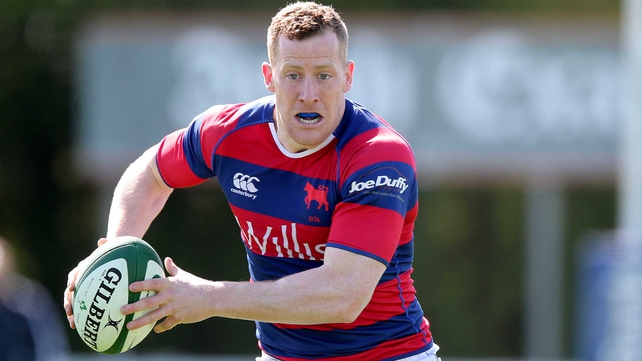 Clontarf look the team to beat in the Division 1A play-offs after a well-judged 25-12 victory at home to UCD Saturday afternoon.

'Tarf came into the final round as confirmed table toppers and a guaranteed home semi-final, but they were determined to extend their winning run to seven games.

This was actually a dress rehearsal for next week's play-offs as fourth-placed UCD will make the return trip to Castle Avenue. The students were looking for a confidence-boosting performance and result on the back of four straight defeats.

A tight first half of few scoring chances ended 5-0 in 'Tarf's favour, with experienced centre Evan Ryan finishing off a fine breakaway score.

Given the pressure they applied, UCD should have been on the scoreboard by half-time but out-half Liam Bourke, fresh from playing for the Ireland Universities side last week, missed a late penalty.

UCD did have the better of the third quarter, though, as they took advantage of Michael Noone's sin-binning. They sandwiched Mick McGrath's 13th league try with two well-taken touchdowns from Leinster 'A' captain Peadar Timmins. Bourke converted one to tie things up at 12-all.

However, just as they did last time out against Old Belvedere, Clontarf showed their enviable ability to find an extra gear in the final quarter.

Full-back Rob Keogh [above] nudged them back in front with a penalty and then talented young back rower Neil Reilly came off the bench to score a try. Keogh converted and tagged on a final penalty as Andy Wood's side ended the campaign eight points clear at the summit.

Terenure had beaten fellow strugglers Galwegians 14-10 out west two weeks ago to move four points clear of the relegation play-off spot, but they still needed a positive result on Saturday to make sure they remained a Division 1A club.

The eighth-placed side were well on course by half-time, leading 19-0 despite losing hooker Rob Smyth to the sin-bin. Flanker and captain James O'Neill touched down from a well-executed lineout maul, and pacey winger Swaine latched onto a bouncing ball for his first try before converting flanker Duke's effort just before the interval.

Belvedere, who were already destined to finish in mid-table, exerted some pressure on the restart but Adam Howard's yellow card left them shorthanded and 'Nure soon took advantage for their bonus point score.

Smyth's replacement Adam Clarkin crossed to the right of the posts after some excellent approach work from out-half James Thornton. 'Belvo opened their account just shy of the hour mark, with the versatile Daniel Riordan, who lined out in the number 10 jersey, crashing over after linking up superbly with replacement Max Ludwig.

Charlie Rock converted and also added the extras to a late consolation effort from winger Andrew Larkin, but in between Swaine, who finished with a 16-point haul, squeezed through for his second touchdown and Duke did likewise, scoring by the posts after a Michael Melia effort had been ruled out for a forward pass by Harrison Brewer. 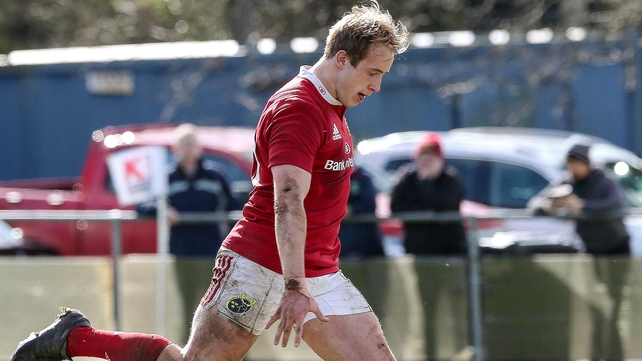 Young Munster handed dethroned league champions Lansdowne a 19-point beating in Greenfields but still missed out on home advantage in the Division 1A semi-finals.

The Cookies could not add a fourth try late on in their 22-3 victory and that proved costly as Cork Constitution's maximum return against Galwegians saw them leapfrog Munsters into second place in the final standings.

So the Limerick men must make the trip to Leeside next Saturday afternoon to face the former club of their current head coach David Corkery, who has guided them to eight wins in their last nine league outings.

Lansdowne were rewarded for their early pressure at Tom Clifford Park with a penalty from out-half and captain Scott Deasy, another ex-Constitution man.

This served as a wake-up call for Young Munster whose strong-running centre Dan Goggin burst through for a 14th minute try, converted by man-of-the-match Gearoid Lyons [above].

A late penalty from Lyons made it 10-3 at half-time, but it was not until an action-packed final 10 minutes that Corkery's charges had the points in the bag.

Winger Jack Harrington got over in the corner and then a superb passing movement, topped off by an excellent final delivery from Abrie Griesel, saw his half-back partner Lyons touch down and convert to complete his 12-point personal haul.