Title holders Glasgow Warriors extended their winning run in the Guinness PRO12 to five matches with a hard-fought 27-17 victory over Ulster at Scotstoun.

Finn Russell was the key man for the champions, creating tries for Stuart Hogg and Tommy Seymour and kicking 14 points.

Hogg had the final word with a monstrous penalty in an encounter that saw Glasgow trail until the final quarter when they pulled away to secure an important success.

Iain Henderson and Stuart McCloskey had a try apiece for Ulster, both converted by Paddy Jackson, who also kicked a penalty.

Ulster raced into action and made their intentions clear inside the first minute. Ruan Pienaar charged down an attempted clearance by Russell but to the relief of the hosts the ball ran beyond the dead-ball line.

Hogg was back in action for his club a day after being named RBS Six Nations player of the championship. However, the evening started inauspiciously for the full-back, whose first contribution was a professional foul that earned him a yellow card after only two minutes.

The visitors booted the ensuing penalty into touch and Russell atoned for his earlier error with a try-saving intervention from the driven lineout. His defensive efforts gave Ulster a five-metre scrum that ended with Stuart Olding sending Henderson hurtling through the short-handed home defence for the touchdown. Jackson added the extra two points.

Restored to full strength, Glasgow started to make an impression. As the clock ticked past 22 minutes the hosts capitalised on a spell of sustained pressure when Russell steered a penalty between the sticks to open the home side's account.

With the momentum swinging in Glasgow's favour, a series of attacks stretched the Ulster defence and the Scots trimmed the deficit to a single point when Russell booted his second penalty of the evening after 28 minutes.

Against the run of play, Ulster extended their lead five minutes before the interval when Jackson slotted a three-pointer on a rare foray into the Glasgow half.

Glasgow bounced back and, with the clock ticking towards half-time, earned a penalty within the range of Russell who added a further three points to his tally, leaving the hosts one point adrift at the interval, trailing 10-9.

The home side started the second period well but it was the visitors who were next on the scoreboard in bizarre circumstances. Although appearing to take the kick from the wrong spot, Pienaar booted a penalty award into touch 10 metres from the Glasgow line and with the home defenders strolling back, Craig Gilroy took a quick throw to McCloskey who jogged in. Jackson thumped over the conversion.

Russell missed with a long-range effort after 56 minutes but made amends two minutes later with a floated pass to Hogg who displayed his pace to chip over the advancing defenders then win the race to the line, despite the attentions of Pienaar.

Glasgow snatched the lead with 18 minutes to play after another scintillating contribution by Russell, whose vision enabled him to deliver a pinpoint cross-kick to Seymour, and the winger blazed past two defenders to touch down. Russell's conversion scraped over to hand Glasgow a four-point advantage.

That grew to seven points after 73 minutes when Russell added another penalty.

And although the Scotland stand-off missed with a kick at goal that would have left Ulster empty-handed, Hogg robbed the visitors of the consolation point when he hammered over a penalty from inside his own half to add gloss to the win. 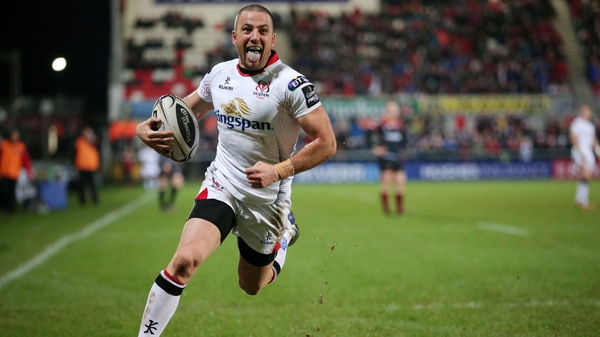 Ian Humphreys to retire at end of season