If a couple of Australians have their way, the days when an athlete can take a big hit on the field then groggily pick himself up and head back into the fray will soon be gone.

The dangers of head trauma have become an area of major concern in contact sports and in the 'Brainband', Alan Pearce and Braden Wilson believe they have come up with a device to objectively flag up the potential for concussion.

Rather than the rough and ready "How many fingers can you see?" test much beloved of sponge-wielding trainers for time immemorial, the 'Brainband' uses the latest smart technology to asssess and transmit the extent of a head knock.

The device, a thick black headband hiding a removable "tech-pack", has coloured LED lights which indicate the G-force of the hit, as well as rotation of the head, from yellow through orange up to red for a high alert.

"If you are not assessing concussions properly, there is potential for further injury, and in junior athletes it could be catastrophic," Pearce, an associate professor in neuroscience at Melbourne's Swinburne University, told Reuters.

"Concussion is heavily under-reported by a factor of six to 10 times the real figure that we're estimating at the moment.

"With something like the Brainband we're looking at having an objective measure that removes that subjectivity or the possibility of a player not wanting to reveal they've got a concussion."

Pearce was paired with industrial designer Wilson by Samsung's Mixed Talents campaign and the pair have utilised the company's technology in the development of the gear, which also broadcasts alerts to referees and coaches via smart devices.

Wilson said that in his design he had reflected anticipated reservations from athletes in sports like rugby and Australian Rules Football about wearing such a device.

"There were some challenges with our target audience, who are quite a stoic crowd," Wilson said.

"So we had to speak to them in a language they understood so we went with the headband format. We wanted it to be worn with pride - a crown, not a bandage - something that was symbolic of a gladiator as our modern athletes are."

Head injuries have become a touchstone for criticism of contact sports in recent years, particularly with regard to American football in the United States.

The National Football League (NFL) last April settled a lawsuit brought by 5,000 former players who accused it of covering up the dangers of concussions.

Last week, the league acknowledged for the first time the link between the degenerative brain condition known as chronic traumatic encephalopathy (CTE) and repeated concussions on the field.

Wallabies full-back Israel Folau, who has also played rugby league and Australian Rules at an elite level, modelled the Brainband as part of the "validation" process this week.

The next stage is to work on a production model that can be delivered at a price which will enable it to feature at all levels of contact sport within the next few years, not just at the top of the game.

"At the elite level, they do have a whole staff of clinicians who can look after the player with expert medical care," Pearce added.

"But at the junior levels, they may have a trainers who are not really in a position to diagnose neurological conditions like concussions.

"It should be as much part of the uniform as the boots and the socks and the jersey and not even be noticed." 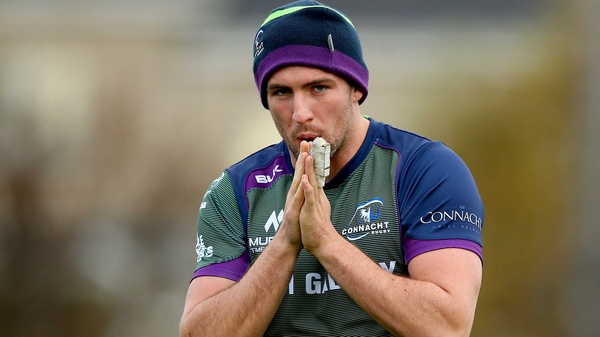 Connacht centre Dave McSharry out for season with concussion