Winger Michael Brown bagged a try in each half as Clontarf ran out deserved 18-12 winners over Cork Constitution at Temple Hill.

With leaders UCD losing at Terenure the previous night, 'Tarf succeeded in closing the gap at the summit to a single point as the avenged an October defeat to Cork Con.

Two penalties from out-half Joey Carbery after 2 and 6 minutes set them on their way, and Brown's 22nd-minute converted try came from cleanly-won lineout possession and neat hands in the backs.

Playing into a strong wind, Darragh Lyons' penalty on the half hour mark opened Con's account as they trailed 13-3 at the interval.

Two more penalties from the experienced number 10 had the Leesiders even closer just six minutes into the second half.

However, some crisp interplay between backs and forwards created the opening for Brown's 64th-minute score, and Con could only respond with a Lyons penalty two minutes from the end.

Galwegians caused one of the shocks of the day in the Ulster Bank League as they defeated play-off chasers Garryowen 30-17 at Crowley Park.

The third-from-bottom westerners won for the first time in five outings, with lively left winger John Cleary helping himself to a brace of tries

Number 8 Anthony Ryan finished off some free-flowing build-up play for the opening try in the 11th minute, although Garryowen's third scrum penalty saw Neil Cronin cut the gap to 5-3.

However, a turnover straight from the restart saw Cleary break free to go over in the right corner and Connacht's Shane O'Leary nailed a superb touchline conversion.

Try number three came from promising hooker Jack Dinneen whose big hand-off saw him power over from the 22-metre line. O'Leary converted and landed a drop goal before Garryowen out-half Andrew O'Byrne seized on a loose ball to dot down just before half-time.

The Light Blues reduced the arrears further from 22-10 to 22-17 thanks to a lineout maul try from replacement front rower JP Cooney on the hour mark.

But back came 'Wegians, grabbing their bonus point score within five minutes as Cleary finished off following a tremendous break by his wing colleague Adam Leavy.

A second drop goal from out-half O'Leary in the 74th minute made certain of the win for Matt Brown's charges, who still have a battle on their hands with Terenure - lying in the relegation play-off spot - just two points behind them. 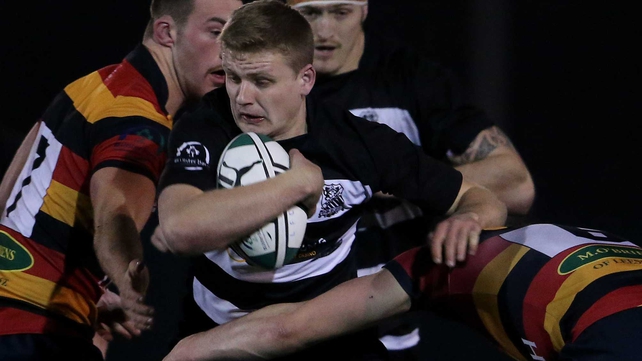 Old Belvedere put a run of four straight league defeats behind them with an excellent 26-15 win over Lansdowne on the Aviva Stadium's back pitch.

'Belvo showed impressive resilience as they bounce back from leaking a try to Lansdowne captain Scott Deasy after just 40 seconds of the game.

The headquarters club still led 15-13 at the turnaround, with Deasy's Ireland Club XV colleague Mark Roche going over in the corner for their second try.

However, the visitors drew confidence from centre Steve Crosbie's first-half touchdown and the Leinster prospect played a pivotal role for them in the second half.

Crosbie knocked over a penalty from 45 metres out for a 16-15 lead and although he missed a couple of difficult place-kicks, the former Ireland Under-20 international registered his fourth successful penalty with four minutes left.

With their local rivals Garryowen losing in Galway, Young Munster dug deep to see off Ballynahinch's challenge on a 7-6 scoreline in Greenfields.

Third-placed Young Munster have opened up a nine-point lead on Garryowen, who currently hold the fourth and final play-off place, and David Corkery's side sit just three points off the summit.

The Cookies had to work very hard to beat bottom side Ballynahinch at Tom Clifford Park where, despite the strong wind, conditions were much better than they were for last week's 29-13 win over Galwegians.

'Hinch were first to have the wind at their backs and penalties by winger Chris Quinn after 4 and 24 minutes had them in front. Even though they were down to 14 men for a spell, they held onto their 6-0 advantage up to half-time.

Nonetheless, just nine minutes into the second half and following a series of close-in scrums, Munsters were awarded a penalty try which out-half Gearoid Lyons converted.

The home side, who also had a player sin-binned, were unable to add to their tally in what turned out to be a real dogfight. Coupled with their fifth successive triumph, there was another positive for the Cookies as back rower Sean Rennison came on for the final eight minutes to end his lengthy injury lay-off. 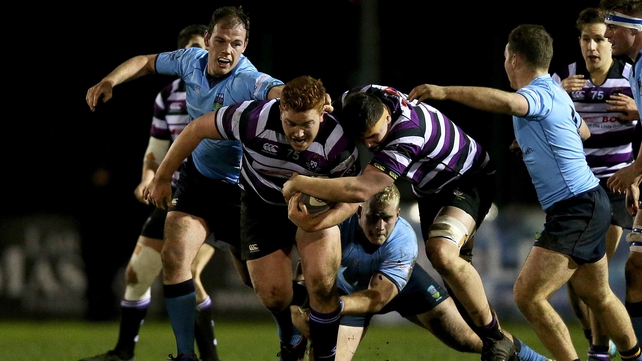 Jake Swaine was the star performer for Terenure College on Friday night as they secured a much-needed 13-0 win over league leaders UCD.

Swaine, the goal-kicking winger, kicked two first-half penalties and converted his own try to give his side a timely fillip on the back of five losses in-a-row.

UCD faced into a stiff breeze early on and although Billy Dardis and Barry Daly carried the ball effectively and the visitors' maul threatened, Terenure succeeded in keeping them out.

The deadlock was eventually broken by Swaine's boot in the 27th minute, as he landed a spectacular kick from just inside the students' half. 'Nure replacement Robbie Smyth had a try ruled out for an earlier infringement, but Swaine doubled their lead with a close range kick with 34 minutes gone.

Disciplined defending kept relegation-threatened 'Nure on course while their influential flanker Robert Duke was in the sin bin, and UCD had their replacement hooker Gordon Frayne carded in the 55th minute.

Swaine soon stamped his authority on the game with a fantastic intercept try, running almost the entire length of the pitch to dot down under the posts and convert.

Despite struggling to find their best form, UCD captain Stephen Murphy almost broke through for a try on the left in the 78th minute. But that missed opportunity summed up the visitors' night as Terenure's dogged defence frustrated them into submission.