Leinster went top of the Pro12 table for the first time this season, albeit only for two hours, after holding firm against a late Cardiff onslaught.

It was a mammoth effort by Leo Cullen's men, buoyed by the return of Cian Healy, and Cardiff's afternoon was compounded by the news that Wales centre Cory Allen looks set to be ruled out of the remainder of the RBS 6 Nations after suffering an ankle injury on Saturday.

Allen was carried off on a stretcher early in the second half of at the Arms Park.

The injury, should it prove as serious as it appeared, will further limit Warren Gatland's midfield options and comes as another blow to the four-cap centre who was ruled out of the World Cup after one game.

Leinster started with six of the Ireland squad as well as a return from injury for Healy.

The prop was part of an all-international front row that dominated the early set-piece exchanges and allowed Ian Madigan to level early. 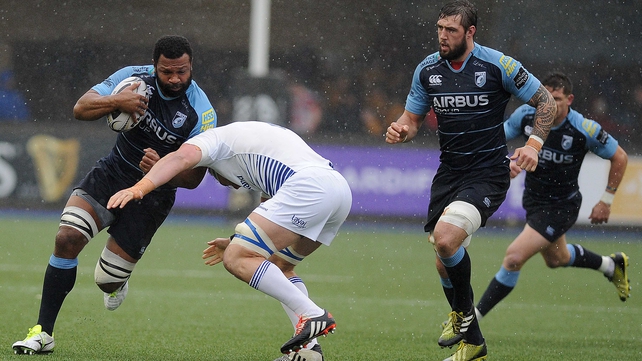 Madigan was making his 140th appearance for the province but missed the chance to put Leinster ahead when his long-range effort struck the post.

It summed up Leinster's first half as they struggled to make the most of playing with a fierce wind at their backs.

Fergus McFadden went close to scoring when he latched onto Madigan's cross-field kick. Rhys Patchell did well to scramble across and forced the Ireland wing to drop the ball over the line.

It got worse for McFadden just a minute later when he was sin-binned for a dangerous tackle on Lloyd Williams.

Blues were reluctant to kick into such a strong wind but Alex Cuthbert led a piercing breakaway from under their own posts. Patchell and Williams carried over halfway before McFadden made his reckless challenge.

Anscombe, kicking into the wind, missed the resulting penalty, but Cardiff had the better of the first half until Madigan's injury-time kick gave Leinster a 6-3 lead at the break.

Anscombe levelled early in the second half but the injury to Allen disrupted the hosts, who were forced to play Wales wing Tom James at centre, and Madigan converted a third penalty.

Neither side could craft an opening until Jack Conan slipped down the blindside of a maul before handing Isa Nacewa an easy finish.

Navidi responded after Jordi Murphy was sin-binned but Patchell saw an injury-time drop-goal attempt charged down as Leinster held out.