Stuart Olding scored a try on his return to action for Ulster as they secured a bonus-point 32-13 Guinness Pro12 victory over Benetton Treviso at the Stadio Monigo.

Flanker Sean Reidy, centre Darren Cave and winger Rory Scholes crossed before Olding went over for the crucial fourth try in a clinical second-half performance from the Irish province that kept them in the play-off hunt.

In a tight first half Ian Humphreys kicked two penalties for Ulster with Jayden Hayward adding one of his own for the hosts to send the visitors into the break 6-3 up.

Hayward levelled the scores 10 minutes after the interval but from there Ulster took control of the match.

Reidy was the first to breach the Treviso defence when strong work from the forwards allowed him to burrow over from close range and Humphreys made no mistake with the conversion.

Cave went over soon after with another try created by forward pressure in the Treviso 22. The Ireland centre took a short pass from scrum-half Paul Marshall to scoot over and Humphreys again converted.

Scholes incepted a loose pass from Sam Christie to run half the length of the field to score with Olding converting before another spell of Ulster forward pressure saw the ball spun wide for Olding to cross.

Braam Steyn scored a late consolation for Treviso when he picked the ball up from the back of the maul to dot down and Hayward added the extras. 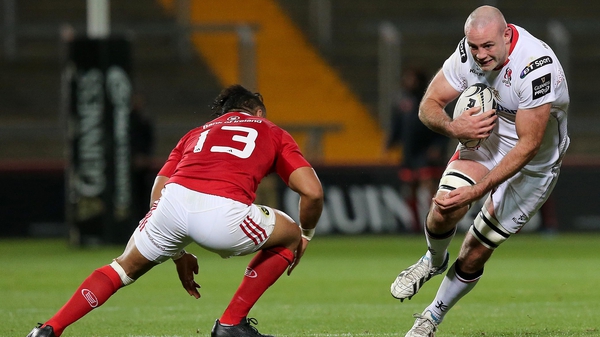