Robbie Henshaw remains on Connacht’s injury list but the Ireland centre is expected to return within a fortnight.

The 22-year-old injured his hand during the Pro12 win over Munster in November and a scan last week showed that the fracture was not fully healed.

“The surgeon has advised another 1-2 weeks before the Ireland international returns to match action,” a Connacht statement read.

He had initially been ruled out for a six-week spell.

Ireland begin their Six Nations campaign against Wales on 7 February.

Meanwhile, Connacht second row Andrew Browne will be out for four to six weeks after an AC fracture during the loss to Scarlets at the weekend.

Scrum-half Kieran Marmion (hip flexor) and back Craig Ronaldson (shoulder) will be monitored during the week.

Denis Buckley, Eoin McKeon are available for selection for Saturday's Challenge Cup game away to Brive (7.45pm), while Darragh Leader should return in the coming weeks.

Openside flanker Nepia Fox-Matamua's surgery on his ruptured ACL last week was successful and the New Zealander is expected to be fit for pre-season 2016/17. 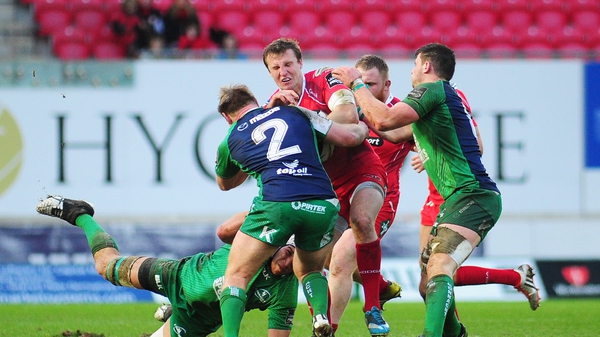 Connacht let it slip against Scarlets