Ulster staged one of the great European rugby comebacks as they overturned a 23-point half-time deficit in Oyonnax to keep alive their chances of progressing to the last eight in the Champions Cup with a sensational 24-23 triumph.

It was a second successive victory on French soil for Les Kiss's men following on from their 25-23 win in Toulouse in round four and meant they closed the gap at the top of Pool 1 to six points with two games left to play.

They were 23-0 down at the break, but the Irish province were a different animal on the turnaround as they stormed back with tries from from Rory Scholes, Craig Gilroy and Kyle McCall before Paddy Jackson's booming penalty completed an incredible recovery.

Oyonnax used the conditions to their advantage in the first 40 minutes and looked set to break their Champions Cup duck in the pool after three harrowing defeats. They were desperate for a victory having won only once in their last eight games.

They seemed to have set themselves on the right track with two unanswered first-half tries - first hooker Jeremie Maurouard set the ball rolling with a seventh-minute try from a driving line-out and the former Wales outside-half Nicky Robinson added the conversion and then three successive penalties.

Ulster were under the cosh at the scrum and took 35 minutes to even reach the home side's 22. Then they coughed up the ball 10 metres out and Fijian wing Uwa Tawalo picked up and outsprinted Ian Humphreys in an 80-metre race to the Ulster posts. 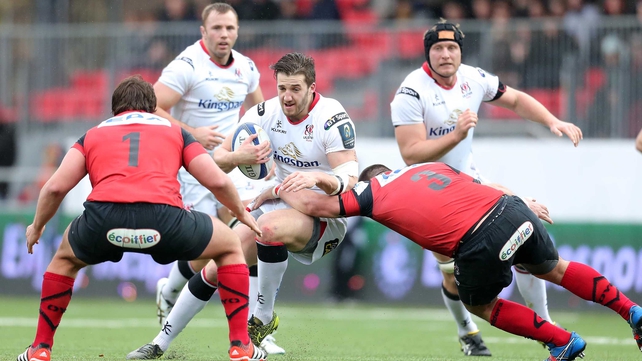 Robinson added the simple conversion to make it 23-0 at the break and it looked as though Ulster's European dreams were in tatters.

Director of rugby Les Kiss responded to the desperate situation by introducing the experience of Ruan Pienaar and Jackson at half-back and added the power of Nick Williams to the pack at the break.

It led to a completely transformed Ulster side and performance in the second half and from the moment Scholes raced 30 metres to the line after an inside pass from the outstanding Stuart McCloskey the comeback was on.

Jackson added the simple conversion and then two tries in the space of four minutes from Gilroy and loosehead prop McCall, both converted by Jackson, made it all to play for in the final 10 minutes.

Ulster had their tails up and when replacement prop Horace Pungea conceded a penalty at a breakdown one metre inside the Ulster half there was a chance for Ulster to take the lead.

Jackson stepped up to aim for the posts and his kick sailed over to give the Irishmen the lead with three minutes left on the clock.

Ulster had to defend for their lives in the closing few minutes and turned over an Oyonnax scrum on their 22 in the last play of the game to be certain of a victory that sets up a massive trip to Allianz Park to face Saracens in round five. 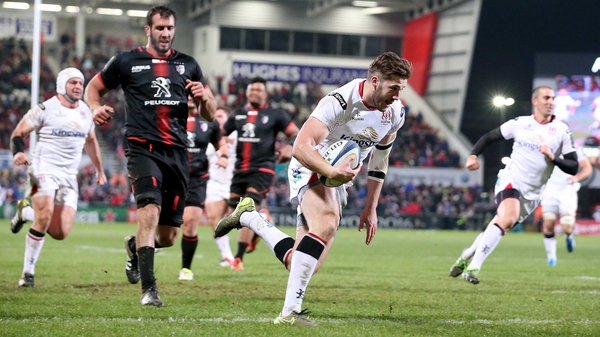