UCD 45 Garryowen 19
It was business as usual at the Belfield Bowl where Division 1A pacesetters UCD swept Garryowen aside in a 26-point bonus point triumph.

With Leinster young guns Ross Byrne and Nick McCarthy directing operations from half-back, the students extended their winning streak to six games and pushed seven points clear at the summit.

Garryowen great and 1948 Grand Slam winner Paddy Reid, for whom there was a minute's silence held before kick-off following his death during the week, would have been thrilled with the running rugby on show, albeit that his beloved Light Blues were left trailing 21-7 by half-time.

Barry Daly broke through midfield to set up a fifth minute opener for fellow winger Adam Byrne, and the long-striding Daly soon got over in the right corner for his eighth try of the league run.

Garryowen answered back with a Neil Cronin try off a five-metre scrum but despite some strong carries from Munster's Jordan Coghlan (who started in the centre) and Shane Buckley, the visitors fell further behind when Adam Byrne bagged his second try out wide.

UCD held firm amid some early Garryowen pressure in the second period and it was Daly who sidestepped his way under the posts for the bonus point score on the hour mark.

Although the Limerick men hit back with an intercept effort from Coghlan, Dan Leavy was next on the scoresheet for UCD, with Sean McNulty supplying the assist after gathering a Ross Byrne cross kick.

There was still time for two more College tries in the closing quarter of an hour, Leavy completing his brace from a Jamie Glynn kick through and a bout of forward pressure paving the way for full-back Billy Dardis to skip over. Garryowen openside Dave Sherry grabbed a late consolation score while UCD were down to 14 men. 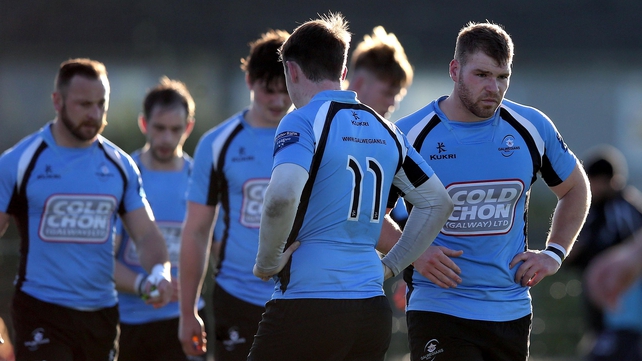 Ballynahinch's second win in three Ulster Bank League games has boosted their hopes of avoiding relegation from the top flight.

'Hinch outplayed a flat Galwegians team on a heavy pitch at Ballymacarn Park, with a strong second half display including converted tries from Blane McIlroy, Aaron Cairns and Conor Joyce.

Both kickers missed either half of the interval, failing to take advantage of yellow cards for 'Hinch captain Paul Pritchard and his 'Wegians counterpart Ja Naughton. But while the latter was off, Robin Harte cut through to set up scrum half McIlroy's 48th-minute score.

Quinn converted and he added a penalty three minutes later to open up a considerable gap at 19-6. Galwegians flanker Marc Kelly's third try in the space of a week reduced the arrears to eight points, but 'Hinch soon found an extra gear.

A superb kick from number 10 Sam Windsor picked out winger Cairns for another seven-pointer with 63 minutes gone, and the result was sealed nine minutes later when flanker Joyce crashed over on the end of a lineout maul. John Cleary finished off a neat back-line move in the dying minutes, but the Galway men were very much second best on the day. 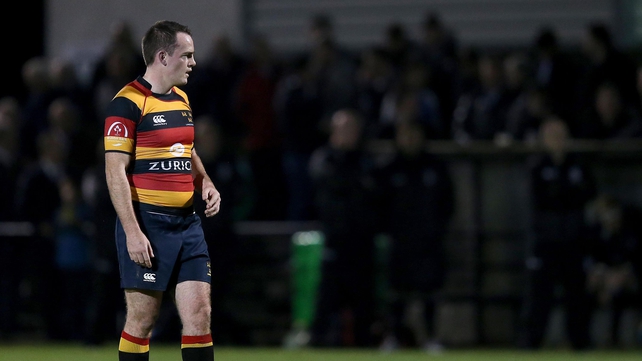 Scott Deasy played the captain's role as his late penalty guided Lansdowne to a gritty 19-18 victory over play-off rivals Clontarf on the 4G pitch at Castle Avenue.

The steely out-half kicked 14 points in all, including four penalty goals, to deny Clontarf who had been within touching distance of the win thanks to replacement Eoghan Browne's try.

History was repeating itself as back in late November, Clontarf missed out on an away triumph over Lansdowne when a late Deasy-converted try saw Mike Ruddock's men sneak a 23-all draw.

The north Dubliners, beaten by Garryowen last week, got off to a poor start today as Deasy slotted two penalties and converted returning scrum half Adam Griggs' try - the New Zealander seized his chance to dive over from a close-in ruck.

Deasy's opposite number, Joey Carbery, showed lovely hands to create an unconverted try for winger Rob McGrath which settled 'Tarf down. Carbery tagged on a penalty early in the second half to make it 13-8.

The tide seemed to be turning as Carbery soon made it a two-point game. A costly yellow card for Clontarf replacement scrum half Sam Cronin saw Deasy respond off the kicking tee and although Carbery successfully converted Browne's try, it was Deasy who had the decisive say for the reigning champions. 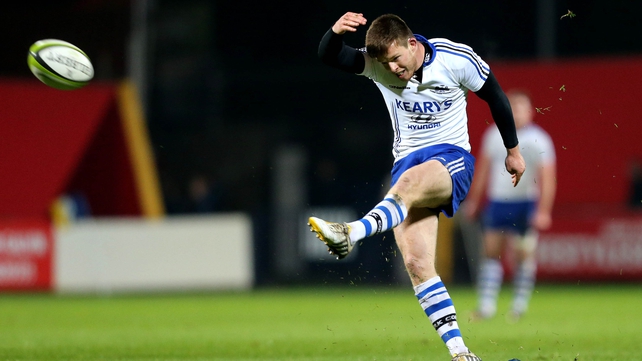 Cork Constitution continued their strong start to 2016 with a 32-point bonus point win over a well-beaten Old Belvedere side at Temple Hill this afternoon.

Brian Hickey's men picked up five valuable league points for the second week running, with centre Ned Hodson dotting down in each half. It was a confidence-boosting result ahead of next Saturday's Bateman Cup semi-final trip to Division 1A leaders UCD.

Playing into the first half wind and rain, Con watched 'Belvo out-half Steve Crosbie miss an early penalty before busy blindside flanker Luke Cahill crashed over from a ruck ten metres out.

The conversion was added by Munster out-half Johnny Holland, who got some decent game-time as he returns from a hamstring injury, and a combination of backs of forwards teed up Hodson's opening five-pointer.

Holland sandwiched in a couple of penalties either side of half-time, leaving the Dubliners 18-0 adrift, and it got worse for the visitors when Con captain James Ryan crossed in the 48th minute.

Holland's successful conversion completed his ten-point haul and Hodson went on to secure the bonus point with twelve minutes remaining, the extras coming from the boot of replacement Darragh Lyons. 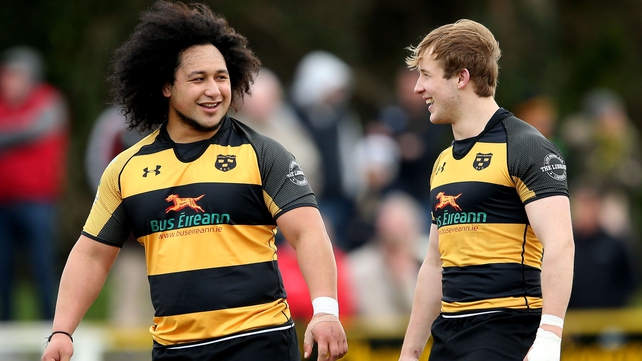 South African scrum half Abrie Griesel grabbed the only try of a closely-fought encounter as Young Munster got back to winning ways - 14-6 - against struggling Terenure College.

Conditions were not ideal at Tom Clifford Park and not surprisingly there were precious few try-scoring opportunities in a contest that saw second-from-bottom 'Nure have a player sin-binned in each half.

Jake Swaine cancelled out Gearoid Lyons' brace of penalties with two of his own as the sides turned around at the break level-pegging (6-6).

The all-important try arrived in the 53rd minute. Terenure seemed to have won their own scrum but the ball popped out and the ever-alert Griesel pounced for his second touchdown of the campaign.

His half-back partner Lyons was unable to convert but he made sure of the league points with his third successful penalty of the afternoon, six minutes from the end.

The result moved David Corkery's charges back up to fifth in the table - just a point behind third-placed Garryowen with a game in hand. Terenure also have an extra fixture to play, but a poor run of form has seen them lose four of their last five matches.

At the eleventh time of asking, Belfast Harlequins opened their win account in Ulster Bank League Division 1B as they pipped Blackrock College 12-10 at Deramore Park.

Bottom side Harlequins narrowed the gap between themselves and UL Bohemians, in ninth, to seven points, with Ireland Under-20 international Jacob Stockdale scoring the match-winning try.

Despite having winger David Rowan sin-binned, Blackrock managed to take the lead on the half hour mark when flanker Sam Cooke dived over in the corner after a lineout maul had initially been thwarted.

The try went unconverted, however, and 'Quins nipped in front for half-time thanks to a Mark Glover seven-pointer. The full-back slid over near the posts following a chip through from out-half Mark Best who converted for a 7-5 scoreline.

The Dubliners replied in the 50th minute, their number 8 Gary Fenn reaching over following a successful forwards drive, however Peter Quirke missed the difficult conversion and he also struck the post with a penalty while 'Quins hooker Paul Jackson was in the bin.

The Ulstermen survived a tricky period, with their defence under severe pressure, before a fleet-footed attack led to Stockdale's crucial 70th-minute score. Best missed the conversion but it was not needed as Adam Larkin's men prevailed by just two points.

O'Donovan, in his 16th year at senior level, lined out on the left wing for the visitors as he set a new caps milestone. His team-mates responded with a determined display and the only try of the game.

Two Tadhg Bennett penalties after 21 and 38 minutes had Marcus Horan's men leading 6-0 at the break. Dolphin halved the deficit, with Cian McGovern splitting the posts after a second Shannon player was yellow carded in the 62nd minute.

However, just five minutes later, Shannon effectively sewed up the result with a well-taken try from O'Donovan's wing colleague Greg O'Shea. He crossed the whitewash after some clever work by full-back Stephen Fitzgerald who drew in a couple of defenders and timed his pass to perfection. Bennett converted for a 10-point winning margin.

Buccaneers chalked up their second victory of the New Year, triumphing 23-22 at College Park as they ended Dublin University's seven-match unbeaten run.

Trinity were made to pay for a series of missed scoring opportunities, with Buccs young out-half Conor McKeon driving his side to a confidence-boosting result.

The Connacht prospect landed three penalty goals and converted a Rory Moloney touchdown and a penalty try. Shane Delahunt, Danny Qualter and industrious openside Moloney were the pick of the visitors' forwards.

Third-placed Dublin University, who led 15-13 at the turnaround, had tries from lock Raef Tyrrell and backs Jack McDermott and Tim Maupin, but McKeon shot them down as Buccs climbed back up to fourth in the Division 1B standings.

Tries from Ryan O'Loughlin, Ivan Dineen and Steve Toal-Lennon did the damage for Division 1B leaders St. Mary's as they overcame south Dublin rivals Old Wesley on a 20-14 scoreline.

In an engrossing clash at Donnybrook, Mary's were only 12-11 to the good at half-time despite the best efforts of Leinster winger Darragh Fanning, who was in influential form once again.

Wesley opened the scoring with a penalty from scrum half Ian Cassidy, but the visiting backs soon clicked into gear and some excellent link play from the lively Robbie Glynn helped O'Loughlin to get over to the left of the posts.

Glynn's half-back partner Sean Kearns converted and he narrowly missed on a 20th minute try when it was ruled out for a knock-on. That second try duly arrived when Fanning's neat pass put former Munster centre Dineen over in the left corner.

However, Wesley came storming back in sight of the interval. Winger James Nolan's powerful finish earned him an unconverted score and Cassidy landed a late penalty to cut the deficit to the bare minimum.

Kearns and Cassidy swapped penalties on the resumption and the hosts were ultimately left to rue some missed opportunities, as Cassidy watched a long range place-kick fall short and then Mary's secured a crucial turnover as the Wesley pack pressed for a try.

Fanning and company went on to show the sort of clinical edge that has them top of the table and on a seven-match winning streak. With Wesley lock Iain McGann sin-binned ten minutes from time, a quick recycle allowed Marcus O'Driscoll to send full-back Toal-Lennon over for a very important try.

To Wesley's credit, they refused to throw in the towel. Morgan Lennon's side had a couple of glorious try-scoring chances late on, but Mary's denied them to run out six-point winners.

Ballymena remain just two points behind table-topping St. Mary's after coming from behind to beat UL Bohemians 17-15 at Annacotty.

New Zealander Rick McKenna fired over three first half penalties to give UL a 9-5 advantage at the break. Ballymena's opening try came from a lineout maul with hooker John Andrew getting the touchdown.

The second period was just a minute old when centre Martin Irwin charged down a kick and finished off the visitors' second try which Andrew Magrath converted.

Two more penalties from McKenna moved Bohs back in front at 15-12, but the Braidmen kept up their winning form with an unconverted try in the corner from Ulster-capped flanker Stephen Mulholland. 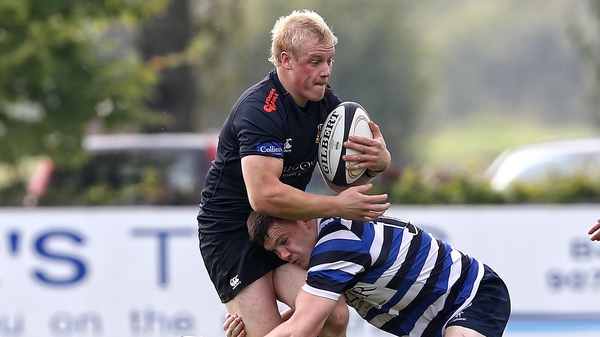