Munster halted their five-game losing run and completed the double over Ulster this season by beating their interprovincial rivals 9-7 on Saturday to stay in touch with the leading sides in the Guinness PRO12.

Anthony Foley's side grabbed their first win in Belfast since October 2010 and, in doing so, also became the first side to win in the league at Ulster since Leinster managed a victory there back in May 2014.

Two penalties and a drop goal from Munster fly-half Ian Keatley put them fifth and inflicted a first reverse on Ulster after four straight victories.

It was a far from memorable game to mark Andrew Trimble becoming the first Ulster player to reach 200 appearances for the province and Les Kiss' squad had to be content with a losing bonus point which saw them end the day sixth.

They did score the game's only try through Louis Ludik's first-half effort though they crucially went scoreless in the second 40 minutes.

They had two shots at goal from Paddy Jackson in that second half but he was short with both difficult efforts. 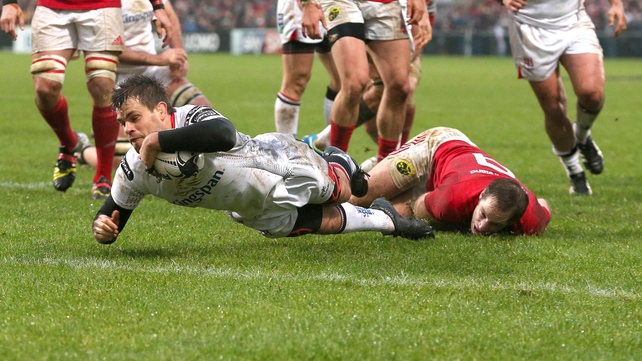 Ulster led 7-3 at the break in what had been a fairly scrappy opening half which they largely dominated in terms of possession and territory.

Munster - who lost Andrew Conway and Dave Foley just prior to kick-off - managed to open the scoring when Keatley landed an eighth-minute penalty after Nick Williams was penalised at a breakdown.

Ulster then came close to hitting back but Ruan Pienaar was penalised for holding on and shortly afterwards Trimble brought Rory Scannell crashing to earth just as the centre looked certain to score.

This led to the home side's most sustained period of pressure in Munster's 22 and eventually Ulster's possession resulted in a breakthrough when Pienaar's pop pass saw full-back Ludik, above, dive over after 23 minutes.

Paddy Jackson, below, converted to give Ulster a 7-3 lead, although they lost prop Wiehahn Herbst to injury before half-time.

The second half saw even more scrappy play and handling errors from both sides but it was Keatley who nailed the first points with a 57th-minute drop goal following a scrum turnover.

And, shortly afterwards, Munster took a two-point lead when Keatley struck a penalty on the hour mark after Ricky Lutton was penalised for offside.

Ulster had to respond and after BJ Botha was pinged at a scrum, Jackson had a shot at goal, three minutes after the hour, but the chance fell just short and Munster cleared. 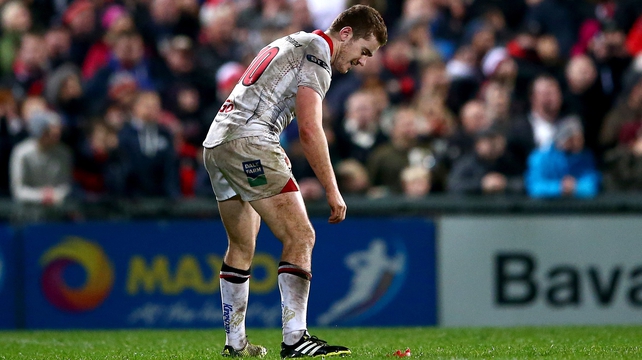 From there, the familiar pattern continued with both sides still making high profile errors, with Ulster now having to increasingly force the play.

It looked a lost cause but then the home side had a shot at it after Gerhard van den Heever was offside from Lucas Amorosino's knock-on.

However, Jackson's 78th-minute effort from near the touchline was well short and Munster hung on for the valuable four points. 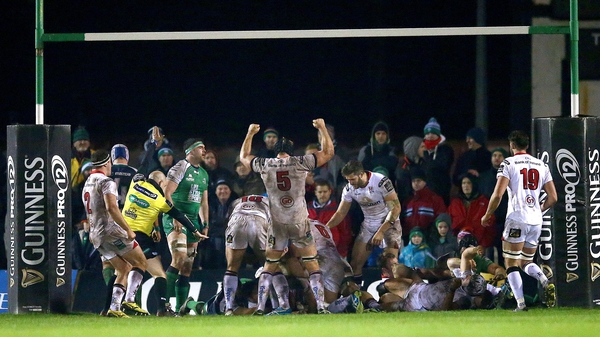