Ian Madigan said the "timing was right" to make the move to Bordeaux after confirming he will join the Top 14 side at the end of the season.

Leinster revealed today that the Ireland out-half will follow in the footsteps of Johnny Sexton, now back at Leinster, and Paul O'Connell by making the switch to France.

Madigan had also attracted the interests of Harlequins and Bristol, as well as being offered fresh terms by Leinster, but he has opted to go overseas in search of a fresh challenge.

The Ireland international had been widely expected to leave after Sexton's return from Racing Metro limited his opportunites to start at out-half.

"While this was a very difficult decision for me to make, leaving the club that I have represented my whole professional life, I feel that the timing is right"

"While this was a very difficult decision for me to make, leaving the club that I have represented my whole professional life, I feel that the timing is right and it is a challenge that I'm looking forward to," he told leinsterrugby.ie.

"Bordeaux Bègles are a team that are making strides in the Top 14 and in Europe and I look forward to being part of that journey and to experiencing a new style of rugby and a new life in France.

"I'd like to thank everyone in Leinster Rugby for their support over the years. I've played with some brilliant players and have worked with some exceptional coaches and while I am reluctant to single one out I want to mention Richie Murphy, who has been by my side from my days in the Sub-Academy and has been a huge influence on me.

"Also to Mick Dawson who has been very supportive throughout my career and it has not gone unnoticed.

"I also couldn't have played as often as I have without the excellent work of the medical and strength and conditioning team in Leinster, who go above and beyond for the players on a daily basis.

"Finally to the Leinster supporters, who have been hugely supportive of me in good times and in bad, thank you. There are a huge few weeks and months ahead with Leinster, and I look forward to playing my part and trying to finish the season out as strongly as possible for them."

Leinster coach Leo Cullen paid tribute to the departing Dubliner, and said he hopes he will one day make a return.

"Ian has been a tremendous servant to Leinster and Irish rugby and we wish him well with his move abroad," said Cullen.

"We fully understand his motivations for deciding to join Bordeaux. Ian has come through the Leinster Academy and age grade system and at 26 still has a huge future in the game and we may see him return to Leinster at some point.

"The key thing for us all now is that we are fully focused on a huge game on Friday against Connacht. After some really pleasing parts to our last performance it's vital that we build on that and look to continually improve."

Bordeaux are currently fifth in the Top 14 an bottom of Pool 2 in the Champions Cup, behind Exeter Chiefs, Clermont and Ospreys.

Madigan kicked a penalty and two conversions in Leinster's 24-7 Pro12 derby win over Munster on Sunday. 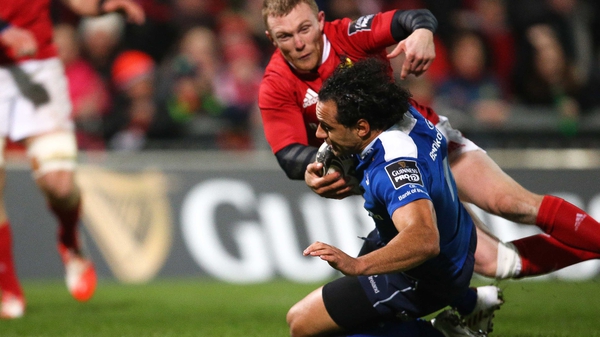