Ulster kept their quarter-final hopes alive when they completed a European Champions Cup double over Toulouse with a 25-23 triumph at Stade Ernest Wallon.

An opportunistic first-half score from Ruan Pienaar put Ulster on course for their second win in three matches.

Andrew Trimble looked to have wrapped it up after 45 minutes, before Gael Fickou led a Toulouse fight-back, but Luke Marshall's late score sealed their third win on French soil.

Les Kiss' side got off to the perfect start as they searched for a repeat of the previous weekend's famous 38-0 thumping of the European aristocrats at Ravenhill.

Gregory Lamboley went off his feet as the Ulster men made their first foray into Toulouse territory, giving Paddy Jackson the chance to snatch an early advantage.

The out-half made no mistake to give the visitors a 3-0 lead after three minutes. Craig Gilroy's afternoon was over after just 13 minutes when he received a poorly-timed pass from Franco Van der Merwe and was hit back into touch by Kunati Kunabuli, resulting in a failed head injury assessment.

Missed penalties from Pienaar and Jackson prevented Ulster from making the breeze at the backs count, but Pienaar struck seven minutes before half-time to give the visitors a 10-0 lead.

They turned up the tempo with some patient phase play and, after Wiehahn Herbst was stopped just short, Pienaar spotted a gap to dot down with Jackson converting.

But the Ireland playmaker put his side under pressure moments later when he deliberately knocked on and was shown yellow, allowing Sebastien Bezy to cut the gap to 10-3.

There was still time for Ulster to go the length of the field to score through Rory Scholes, but the try was chalked off after a forward pass in the build-up.

Bezy landed a penalty to cut the gap to four points, before Ulster reaffirmed their advantage through Trimble.

Stuart McCloskey cut through on a devastating angle to race downfield, before the ball was worked to Van der Merwe and then Trimble, who finished expertly at the corner.

But the wounded hosts hit back after 50 minutes through Fickou. The four-time European champions hammered at the Ulster line before they finally picked their heads up and worked a huge overlap, allowing Fickou to waltz over.

They hit the front for the first time in the match when Bezy landed a long-range penalty after converting the try but Ulster replied once again through the boot of Jackson on the hour mark to retake a two-point lead.

And the points were guaranteed in the 75th minute when Marshall was found on the inside to crash over before Louis Picamoles scored a consolation in the dying moments. 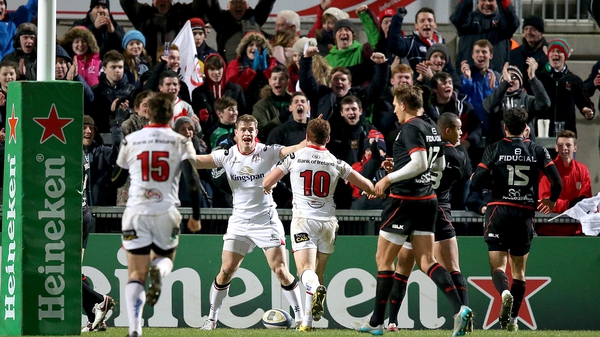 Les Kiss: Ulster must be ready for 'wounded' Toulouse in return clash