It is do or die for Leinster against Bath on Saturday (3.15pm) as they try to bounce back from a heavy loss in Pool 5 of the Champions Cup.

The shocking events in Paris a week ago mean Munster’s campaign is on hold until their back-to-back games against Leicester on successive weekends in December.

Aside from trying to keep their campaign alive, Leinster are on the redemption trail after a surprise defeat to Wasps a week ago.

A home crowd used to roaring their team to victory against all-comers at the RDS instead saw them suffer a chastening 33-6 loss.

The contrast between the two teams was stark.

Wasps looked capable of taking points from a wide variety of situations where Leinster’s attempts to build pressure saw them line up in flat and predictable formations, giving Wasps’ powerful locks and back-rowers ample opportunity to make good tackles and get at the Leinster ruck.

The loss of captain Isa Nacewa from the named starting line-up was obviously not ideal. It must also be allowed that some of the points conceded were down to bad luck.

As the game progressed, a lack of adaptability and versatility also became apparent. Whether that will change as the new coaching team continues to bed in remains to be seen.

But there is no denying that Wasps held the initiative and played with far more positive intent.

Can Leinster change this week?

At least they have Nacewa, Ben Te’o and Luke Fitzgerald back in a much-changed back division.

Nacewa brings leadership and attacking vision while the power and size of Te’o tends to create more opportunity for others. Leinster need to cross the gainline regularly and he is one man capable of doing so more often than not.

Fitzgerald returns at 12. There are few better when the pressure is on and while most of his best form is on the wing but a run out at inside-centre alongside Johnny Sexton is interesting in the context of the next phase of the 28-year-old’s career.

Against that, Leinster are weakened in the pack with Sean O’Brien and Richardt Strauss absent.

A key question is where this match will be decided. Bath’s tradition and quality is the backline, while Leinster have had an obvious ambition to play running rugby, though that went horribly wrong last week.

There have been classic encounters between these two over the years. On the Leinster side, the spirit of the 2005 smash and grab that saw Leinster win at The Rec having trailed by 10 points with four minutes on the clock is needed.

Their backs are against the wall and they simply can’t afford to engage in the aimless carrying into contact with a breakaway of the standard of Francois Louw in the opposition ranks.

Is an away win possible? That may be a stretch to far but something far better than the listless display of a week ago is surely in the offing. 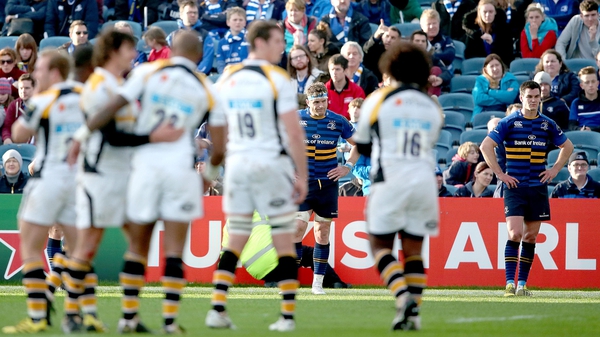