Wing James Short claimed a well-worked touchdown for the Chiefs, while fly-half Gareth Steenson converted and booted two penalties, but they were unable to emulate Leicester, Saracens, Northampton and Wasps, who all claimed opening weekend Champions Cup victories.

The Ospreys could even afford for Biggar to uncharacteristically miss three penalty attempts, but he regained his composure at key moments to ensure his team enjoyed a winning start in Pool Two.

They also denied Exeter a losing bonus point, which could prove important when quarter-final places are decided in January.

It was the Chiefs' first defeat against Welsh opposition in any competition since they attained Aviva Premiership status in 2010.

Biggar kicked a seventh-minute penalty to reward impressive dominance, before he doubled the advantage through a longer-range strike 10 minutes later, leaving Exeter six points behind and already testing Italian referee Marius Mitrea's patience through a number of infringements. 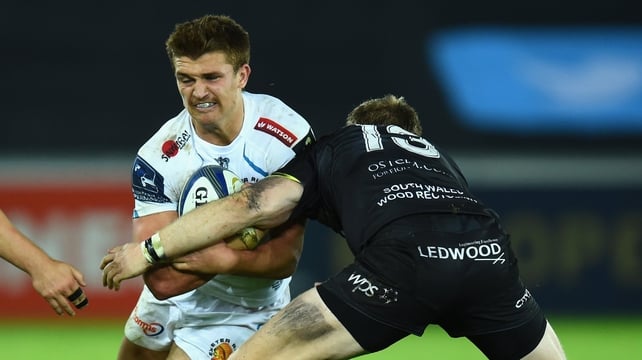 Steenson, though, opened Exeter's account with a penalty, which heralded a first sustained spell of Chiefs pressure, but they then wasted a gilt-edged try opportunity.

The Exeter forwards set up a promising position near to Ospreys' posts, and hooker Luke Cowan-Dickie dived for the line, but the ball was dislodged from his grasp by Paul James' tackle and the chance went astray.

Exeter then made amends just three minutes later, breaching Ospreys' defence after some outstanding work by scrum-half Will Chudley.

Steenson added the conversion, yet Ospreys should have been ahead at the interval instead of trailing 10-6, with the usually ultra-reliable Biggar sending successive penalty kicks wide.

Biggar rebooted his radar in time for the second period, completing a penalty hat-trick after 42 minutes, and although he missed another chance shortly afterwards, a fourth successful strike edged Ospreys back in front.

Exeter only had themselves to blame, undoing a dominant second quarter of the game through poor discipline, but there were also some poor decisions by Mitrea, notably his failure to spot a clear forward pass from scrum-half Brendon Leonard to flanker Justin Tipuric as the Ospreys counter-attacked.

Steenson put Exeter back in front through a 58th-minute penalty, and there remained hardly anything to choose between the teams as they scrapped for vital early points in a tough group that also includes a considerable French challenge from Clermont Auvergne and Bordeaux-Begles.

Exeter's advantage proved short-lived, though, and a Biggar drop-goal meant the lead had changed hands three times in 14 minutes, setting up a tense finale.

And there was no way back for the Chiefs during the closing minutes, with Biggar adding another penalty before Matavesi caught Steenson's intended pass to flanker Dave Ewers and sprinted 65 metres to seal the deal.