Saracens encountered few problems as they launched their European Champions Cup campaign with an emphatic victory over French heavyweights Toulouse at Allianz Park.

Less than 24 hours after the horrifying Paris terror attacks that left more than 120 dead, it unsurprisingly looked as though the Toulouse players' minds were elsewhere.

They were the only French team in Champions Cup action this weekend, with games scheduled to be hosted by Racing 92, Oyonnax, Bordeaux-Begles and Toulon all postponed by tournament organisers European Professional Club Rugby and French domestic rugby chiefs Ligue Nationale de Rugby.

But there was still a game to be won, and English champions Saracens - beaten European finalists last year - took immediate charge of Pool One through a dominant display before heading to Belfast next Friday for an appointment with Ulster.

Their only source of frustration was a failure to claim the maximum five points, given that Wyles claimed Saracens' third try after just 42 minutes.

But they could still take satisfaction from inflicting a heaviest European Cup defeat on Toulouse since Ulster beat them 30-3 in 2006, with the visitors managing a try from substitute hooker Christopher Tolofua that scrum-half Sebastien Bezy converted.

Several Toulouse players were close to tears during a minute's silence before kick-off, which was followed by the French national anthem - La Marseillaise - that rang out on a wet and windy evening in north London.

Despite the conditions, Saracens wasted little time moving through the gears, and they built a 13-0 lead inside 15 minutes. 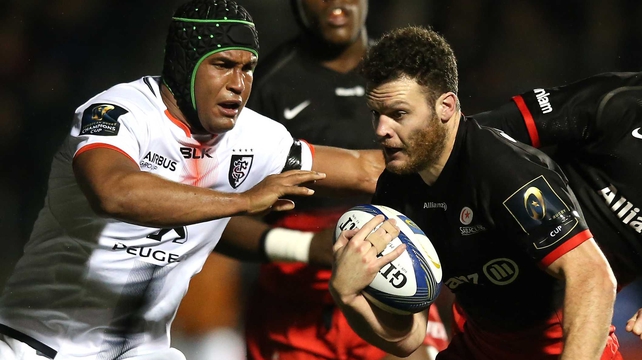 Farrell kicked two short-range penalties, then the Saracens forwards powered deep into Toulouse territory before creating enough space and time for Mako Vunipola to charge over from close range for a try that Farrell converted.

Toulouse could not get out of their own half, pinned back by a combination of impressive Saracens approach play and their own poor discipline that referee George Clancy readily punished.

Farrell kicked two more penalties during a three-minute spell as Saracens went 19 points clear after 25 minutes, but it got even worse for the visitors as half-time approached.

Toulouse's former Saracens prop Census Johnston was sin-binned for a technical offence at a lineout and with the visitors temporarily down to 14 men, Farrell booted another penalty before the home side added a second try.

Slick midfield passing proved too much for Toulouse to cope with and United States World Cup captain Wyles finished impressively in the corner, giving Saracens an unassailable 27-point interval advantage and threatening one of Toulouse's heaviest defeats in almost 20 years of European rugby.

There was no respite for Toulouse early in the second period as Saracens punished them again within two minutes of the restart, Wyles touching down wide out after Farrell drove him over the line.

Toulouse lost their former England fly-half Toby Flood at half-time due to a hand injury but the visitors managed a 51st-minute consolation try when Tolofua touched down and Bezy added the extras.

The final 20 minutes were all about whether or not Saracens could claim a try bonus point, but there was a general lack of continuity after rugby director Mark McCall made several substitutions while Toulouse also toughened up defensively.

Saracens ultimately had to settle for four points, but they are off and running in Europe once again, suggesting they will continue to set the standard among England's Champions Cup representatives.