World Cup-winning coach White reaffirmed his interest in succeeding Stuart Lancaster with England before the European Challenge Cup opener at The Stoop, only for his Montpellier side to slip to a lacklustre loss.

Former South Africa boss White warned England he would not accept ploughing through the "rigmarole" of an application process for the head coach gig, only to be shunned as he was in 2008 and 2012.

The 2007 Webb Ellis Cup winner failed to advance his bargaining position however, Montpellier crumbling just across the road from England's Twickenham headquarters.

Lancaster relinquished his England head coach role by mutual consent on Wednesday, with White quickly confirming his interest in the job.

The 52-year-old was unable to assert any authority over the vacancy in west London however, his side well-beaten despite a promising start. 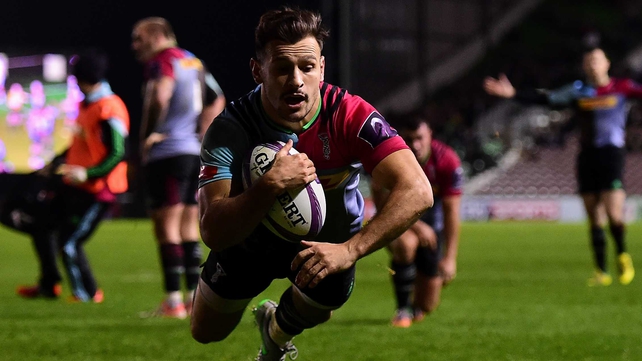 Quins' ragged set-piece and tight-five play gifted Montpellier a nine-point lead before anything meaningful had materialised.

Scrum-half Paillaugue slotted three unanswered penalties to put the visitors in the early ascendancy, before he traded another goal with Nick Evans.

Suddenly the hosts woke up, though, flanker Wallace crossing from a series of tight drives. Then Montpellier prop Mikheil Nariashvili took down a maul illegally and on the wrong side, duly departing to the sin-bin.

Evans' conversion left the hosts 15-12 to the good at the break, with Montpellier's Francois Trinh-Duc failing with a speculative drop-goal attempt.

Quins opened the second half with a third driven score, flanker Clifford burrowing over. Lancaster's England captain Chris Robshaw had joined the fray from the bench at the break, as boss Conor O'Shea continued to ease his back-row mainstay into club action after the World Cup debacle.

Harlequins again exploited Montpellier's soft centre for the bonus-point score just ahead of the hour, scrum-half Care capping a driving maul to extend the home advantage to 12 points.

Not even Paillaugue's sixth penalty could rouse Montpellier, with Quins claiming the try of the night, seizing on Sitaleki Timani's knock-on. Marland Yarde fed Care after a neat chip and collect, before the half-back fed Mike Brown, who had the vision to send Lindsay-Hague under the posts.

Robshaw claimed a late sixth score as Quins turned the screw still further to secure a flawless start to their second-tier European campaign.