Connacht beat Cardiff Blues for only the second time in 12 meetings as they won a Guinness PRO12 thriller at the Sportsground.

Cardiff have been a real bogey team for the westerners, who lost their grip on two winning positions against the Blues last season.

Pat Lam's men finally got the win with a five-try performance on Saturday, however they will be frustrated to have allowed Sam Hobbs over for an injury-time effort which earned the visitors two bonus points.

Cardiff book-ended an entertaining first half with tries from Aled Summerhill and Josh Turnbull, while Nepia Fox-Matamua and Danie Poolman - with their third PRO12 scores of the season - and Kieran Marmion all touched down during a superb 16-minute spell for the hosts.

Connacht's 19-17 interval lead was quickly erased by a Dan Fish seven-pointer, but converted tries from Tiernan O'Halloran and replacement Aly Muldowney, coupled with a Jack Carty penalty, had the home side out of reach before Hobbs' last-gasp response.

The Blues burst into a seventh-minute lead in Galway, their defence pushing up hard and winger Summerhill intercepted Tom McCartney's pass to race away from his 22 for a try that Rhys Patchell converted.

Connacht were level just three minutes later when Marmion showed great pace off the mark, sniffing out the try-scoring opportunity off the base of a ruck. His half-back partner Carty, who had missed an earlier penalty, split the posts with the conversion.

With fit-again number eight Eoin McKeon prominent, the hosts began to hit their stride and back-to-back tries from man-of-the-match Fox-Matamua and Poolman catapulted them into a 19-7 lead.

The former plunged over from a lineout maul and great hands from Bundee Aki and Rory Parata played in Poolman for a fine finish near the corner flag. Carty tagged on one conversion, with the ball falling off the kicking tee for the second one as he drop-kicked wide.

Patchell missed a chance to punish a Finlay Bealham scrum offence, but Danny Wilson's side dominated the closing stages of the half. Number eight Turnbull's pushover score was converted by Patchell, who also fired over a penalty after Connacht full-back O'Halloran was sin-binned for a professional foul - offside at a ruck.

Fourteen-man Connacht were under huge pressure on the restart, needing try-saving interventions from Marmion and Parata, but the pressure told when Blues full-back Fish chased down his own chip and dribbled through to score with Patchell converting.

Despite struggling to gain a foothold in Cardiff territory, Connacht managed to hit back in the 57th minute when Carty's crossfield kick bounced neatly for the unmarked O'Halloran to dot down.

The hosts then turned the screw with a brilliant 20-plus phase attack which resulted in Muldowney breaking through to leave the Blues trailing 33-24.

Replacement Gareth Davies missed two kickable penalties for the Welshmen while Patchell nursed an ankle injury. All was not lost, though, as despite leaking a three-pointer to Carty, prop Hobbs ensured the battling Blues took home a brace of points. 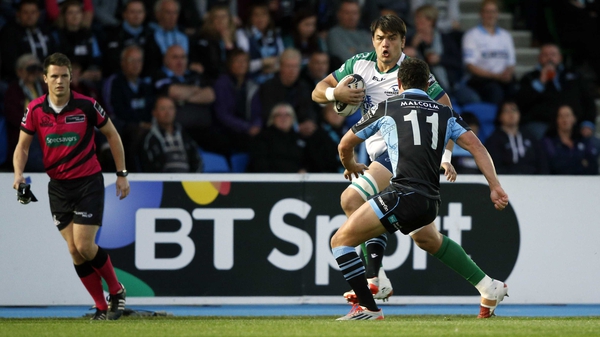