CLONTARF 38 BALLYNAHINCH 17, Castle Avenue
A second-half hat-trick from Mick McGrath saw Clontarf come from behind to beat Ballynahinch 38-17 and maintain their winning start to the campaign.

Adding to his brace from the opening night against UCD, the Leinster winger turned this game on its head as 'Hinch's 10-0 interval lead was erased by McGrath's trio of scores, with the middle one set up by a Matt D'Arcy interception.

Ireland Sevens star Alex Wootton weighed in with the match-winning for Garryowen in a tense 23-19 Munster derby victory over Cork Constitution at Dooradoyle.

There was drama at the start and finish as the third-placed Light Blues maintained their unbeaten form since returning to the top flight. Young full-back Wootton's try seven minutes into injury-time saw the prevail and also pick up a bonus point.

Wootton's Munster Academy colleague Steve McMahon, who lined out on the right wing, run in a brace of tries inside an electric first five minutes from Garryowen. Another Academy talent Tomas Quinlan had Constitution just 15-13 down at the break.

The young out-half converted James Murphy's try and finished with 14 points, including four penalties, but Wootton landed the decisive blow for the hosts.

After losing to leaders Clontarf last time out, Old Belvedere got back to winning ways with a 24-12 defeat of a resilient Galwegians side at Anglesea Road.

Ed O'Keeffe's second league had 'Wegians just 11-7 behind at half-time and turning with the wind behind them, Matt Brown's men went on to dominate the third quarter. However, they could not convert pressure into points and ultimately paid the price.

A Gavin Tynan try had them back in front at 12-11, but 'Belvo were clinical in the final quarter with their Leinster-capped centre Steve Crosbie scoring a penalty and a converted try. Yellow cards for 'Wegians locks Aly Muldowney and Marty Cummins proved costly, and a closing penalty from Shane McDonald wrapped up the home win.

Connacht centre David McSharry, returning from injury, made his presence felt in midfield for the hosts. Young Munster's three tries came from their powerful pack, with former South Africa Under-20 scrum half Abrie Griesel making his first league appearance for the Cookies as a second half replacement.

LANSDOWNE 24 TERENURE COLLEGE 10, Aviva Stadium back pitch
Lansdowne made it two wins in three league outings as they accounted for Terenure College on Friday.

Two quick-fire tries from lock Brian Moylett after 65 and 67 minutes steered the defending Division 1A champions to victory on the Aviva Stadium's back pitch.

In this meeting of the top two finishers in the table from last season, Lansdowne built a 9-0 half-time lead thanks to three penalties from captain Scott Deasy.

Although Terenure skipper James O'Neill claimed the game's first try, Lansdowne's powerful pack - aided by the presence of Leinster's Peter Dooley and Tadhg Beirne - laid the platform for Moylett's timely brace. One of the tries was converted, before 'Nure replacement Niall Lalor notched a second unconverted effort for the visitors.

Returning from their runners-up finish at the World Universities Rugby Cup in Oxford, the Trinity students put in a brave effort and late tries from influential backs Paddy Lavelle and Tim Maupin gave them a deserved try-scoring bonus point.

The Braidmen had established a 20-5 interval lead, however, and tries from John Andrew, Clive Ross, James Beattie and Rodger McBurney, allied to centre Callum Patterson's fourth of the campaign, had them leading from start to finish.

BUCCANEERS 30 BLACKROCK COLLEGE 28, Dubarry Park
Blackrock College lost for the first time this season but two late tries from full-back David Scott-Lennon earned them two bonus points from their trip to the midlands.

Buccaneers did just enough to get over the finish line, winning 30-28 at Dubarry Park with Ireland Under-20 out-half Conor McKeon kicking three penalties and converting tries from Martin Staunton, Daniel Qualter and Eoghan O'Reilly.

McKeon's accuracy with the boot saw him take his tally for the Division 1B campaign to 39 points. Brett Wilkinson's Pirates laid the foundations for victory with a 20-point first half salvo.

Peter Smyth's side did almost all of the damage in the first half during which they scored five tries for a 35-7 lead. John Shine's early effort for the visitors was cancelled out by St. Mary's lock Stephen Bradshaw, who was playing against his young cousin Frank Bradshaw-Ryan in the Shannon engine room.

UL BOHEMIANS 13 DOLPHIN 28, Thomond Park
Dolphin came out of a poor early season patch with a fine 28-13 success away to Munster rivals UL Bohemians at Thomond Park which lifts them up to sixth in the table.

They hit their hosts with four converted tries in the second half, including three penalty tries, to give new head coach Feargus O'Donoghue his first league win.

Robbie Bourke's brace of penalties had UL leading 6-0 at the break, but Dolphin's well-drilled pack - including Munster talents Niall Scannell and John Madigan - soon took over and won some key decisions from referee Dudley Phillips. Ex-Old Crescent winger Will Hanly also chipped in with a try.

OLD WESLEY 33 BELFAST HARLEQUINS 8, Donnybrook
It is as you were at the top of Division 1B as pacesetters Old Wesley collected their third bonus point victory, overcoming Belfast Harlequins 33-8 in the late afternoon kick-off at Donnybrook.

Returning scrum half Dave O'Leary sniped over from close range for the opening try and 11 points from the reliable boot of winger Barry McLaughlin had Wesley 16-3 to the good at half-time. 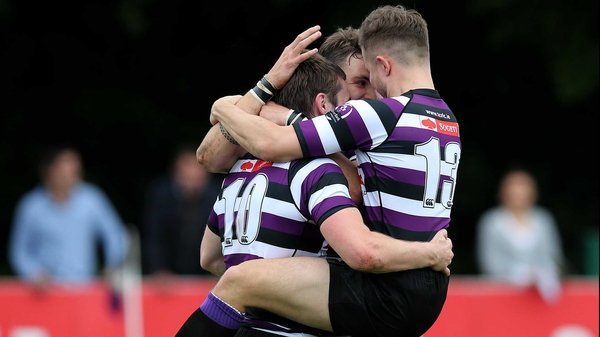