Replacement CJ Stander was the hero as Munster stole a 20-18 Guinness Pro12 victory in the final minute to leave Ospreys winless from their opening two matches.

The South African forward crashed over with seconds to go and Ian Keatley's conversion meant the Irish province have now won their first two league games of the new season.

It was heartbreak for Ospreys after it looked like six Sam Davies penalties would be enough as they led 18-13 going into the last ten minutes but they had to settle for a losing bonus point.

Munster claimed the only other try in the match which was scored by wing Stephen Fitzgerald, with out-half Tyler Bleyendaal claiming eight points with the boot.

Before the start Ospreys honoured the memory of former player Jerry Collins, who died in a car crash in New Zealand in June, with a minute's silence. The Ospreys also retired the number six jersey.

Ospreys just about shaded a tryless first half which was reflected in a 9-6 interval lead.

A good period of pressure in Munster's22 brought a penalty which Davies slotted over after ten minutes.
But all the early good work was undone almost immediately as Munster levelled with a 13th minute penalty by Bleyendaal.

Davies then had a five minutes to forget. He put the restart into touch, missed touch with a penalty and then fluffed an attempted cross-kick from a penalty when the place kick was the obvious option.

At the other end another cross-kick, this time from scrum-half Cathal Sheridan almost produced a try but wing Fitzgerald was unable to touch down.

Although Munster uncharacteristically fluffed a couple of line-outs they found themselves in the lead through a second Blyendaal penalty.

On 36 minutes Ospreys were level again with a second Davies penalty after Dave Kilcoyne had killed the ball in front of the posts after breaks from Joe Bearman and Sam Parry.

And in the final action of the first half Davies made it three penalties from three with a kick from 50 metres after Munster had erred offside.

Davies's fourth penalty seven minutes into the second half opened up a six point cushion but that was wiped out with Fitzgerald's try, which came from a Bleyendaal cross-kick.

But in the final quarter Ospreys regained the lead with two Davies penalties in the space of eight minutes. 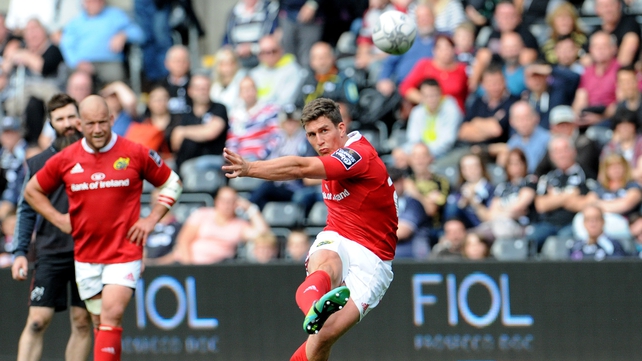 However, the home side failed to soak up some late pressure as Stander wriggled over in the 80th minute for Keatley to kick the winning conversion.