Ma'a Nonu grabbed two tries as the All Blacks scored 28 unanswered points in the second half to beat Australia 41-13 at Eden Park on Saturday and retain the Bledisloe Cup for the 12th successive season.

Dane Coles and Conrad Smith also scored tries, while referee Nigel Owens awarded a penalty try for a high tackle on scrum-half Aaron Smith by Quade Cooper, that resulted in the out-half being sinbinned in the 47th minute. The All Blacks scored two of their tries while he was off the field.

Dan Carter also added 16 points from the boot in captain Richie McCaw's record 142nd test match as the world champions stamped an emphatic message to their challengers they would not relinquish the Webb Ellis trophy easily next month. 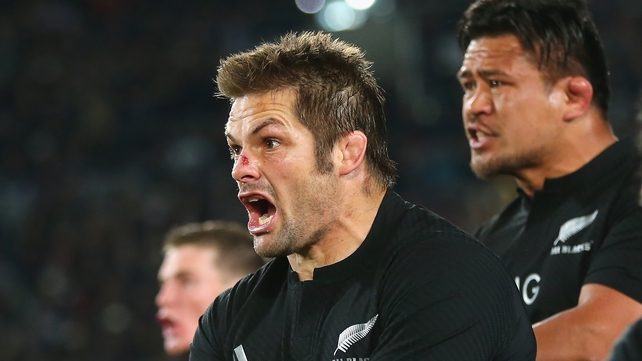 Cooper slotted two first-half penalties, while Israel Folau scored a consolation late try for the visitors, who had hopes of clinching the Bledisloe Cup for the first time since they lost it in 2003 after a 27-19 victory in Sydney last week.

The lessons from Sydney, however, did not seem to have been learned by the home side who were error-prone and kicked much of their possession away in the opening quarter.

A turnover by Sam Whitelock deep inside his own territory in the 21st minute changed the momentum of the first half.

Huge congrats to Richie McCaw in becoming the most capped Test player of all time. No one could be more deserving. #142

That turnover led to hooker Dane Coles sprinting from 45 metres out for a try that gave the All Blacks a 10-3 lead they had really not deserved.

Carter and Cooper then exchanged penalties, though the All Blacks had two further opportunities to extend the lead even further than 13-6 before halftime with Carter missing a long-range penalty and dropgoal.

The All Blacks improved their accuracy and decision making in the second half and put the Wallabies under severe pressure even before Cooper was sinbinned.

The extra man, however, proved all the advantage the world champions needed to run up the score before Folau grabbed a wayward TJ Perenara cross-kick and ran 60 metres unopposed.