Dylan Hartley's World Cup hopes are under severe threat after the England hooker was hit with a four-week ban for headbutting Saracens' Jamie George.

Hartley will miss England's three World Cup warm-up games and the tournament opener against Fiji at Twickenham on September 18.

Hartley accepted the charge of head-butting Saracens hooker George in the second-half of Northampton's 29-24 Aviva Premiership semi-final defeat on Saturday.

"This offence falls within the low entry point for striking with the head," said HHJ Sean Enright, who chaired the hearing.

"There was no significant injury to the other party, the opposition player was not removed from the field of play and the incident did not affect the game.

"However there cannot be any place in our game for this class of behaviour, and that is why we have imposed this sanction."

Hartley's latest misdemeanour takes his career suspension tally past the calendar year mark to 54 weeks - but crucially he has received the lowest possible ban for his offence.

His guilty plea could have swayed the three-man disciplinary panel in the Coventry hearing from adding extra punishments in reflection of his previous poor record.

Hartley could yet become the first player to miss both a British and Irish Lions tour and a Rugby World Cup owing to suspension however - but once more his Test future effectively lies with England boss Stuart Lancaster.

While Hartley will miss England's three World Cup warm-up matches and that vital Fiji clash, Lancaster will still have the ultimate say on his World Cup place.

Serial offender Hartley has now added this ban for head-butting to punishments for elbowing, eye-gouging, biting, punching and swearing.

England have stood by the New Zealand-born hooker at every turn so far: Lancaster must now decide whether this latest setback represents the final straw.

Lancaster did not flinch in banning Manu Tuilagi from Test action until January on May 15, following the Leicester centre's conviction for assaulting police officers.

Hartley admitted he was on his "last chance" with England after serving the 11-week ban for swearing at referee Wayne Barnes in the 2013 Aviva Premiership final that cost him his place on that summer's Lions tour.

The fiery front-rower threw his 2015 Six Nations into jeopardy with a three-week ban for elbowing Leicester's Matt Smith in the face in December 2014, however.

That misdemeanour led England boss Lancaster to proclaim he would make "crystal clear" to Hartley that "discipline has to be top-notch", but still Rotorua-born hooker retained his Test place.

Again Lancaster finds himself weighing up whether he can trust Hartley to keep his cool when it matters the most.

With his guilty plea on Wednesday night, Hartley has effectively admitted once more that he continues his battle to stay on the right side of that line. 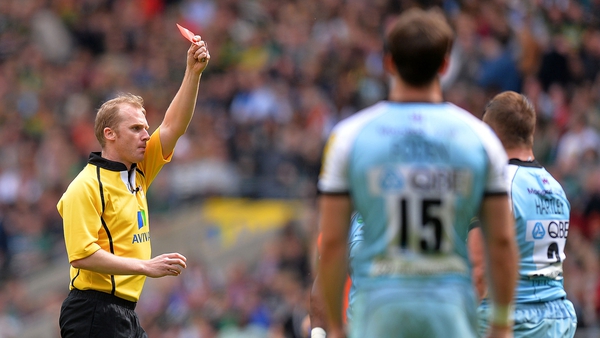 Lancaster to talk discipline with Hartley