Munster are through to a Guinness Pro12 final with Glasgow but made hard work of it against a persistent Ospreys side, eventually winning 21-18 at Thomond Park.

A try from Simon Zebo at the end of the first half gave Anthony Foley’s side an 11-3 lead at the break with the other points coming from the boot of Ian Keatley, who only managed two successful kicks from seven attempts.

Munster hit back immediately when Paddy Butler touched down before Jeff Hassler went under the posts for the visitors, which Dan Biggar converted. He added another penalty soon after to bring the visitors within three.

There was still time for a dramatic conclusion and it looked for a moment like Munster would lose to a try scored in the final play of the match by Josh Matavesi.

But the 2009 and 2011 champions were reprieved when the try was disallowed after a TMO consultation ordered by Nigel Owens.

Foley's team will play Glasgow Warriors in the decider on 30 May in Belfast.

The Ospreys had burst out of the traps with Hassler and Dan Evans exploiting space on the right wing and Biggar, who missed an early drop goal, almost releasing Scott Baldwin for a try.

Paul O'Connell, in what could prove to be his final Thomond Park appearance for Munster, came to their rescue, snaffling turnover ball after Eli Walker was hauled down just short. 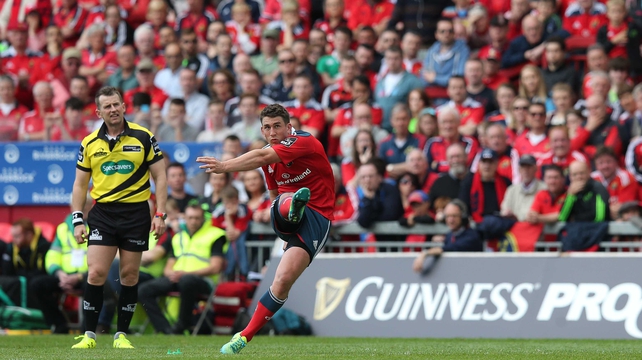 Munster then went close as Dave Kilcoyne made good yardage and fellow prop Stephen Archer was smothered out in the left corner.

Keatley cancelled out Biggar's opening penalty on the quarter hour and although Munster lost Conor Murray to a knee injury, a second penalty from Keatley had them in front for the first time. 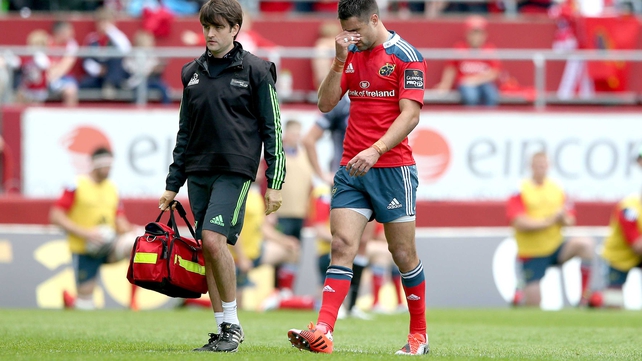 There was little between the sides during a scrappy second quarter, Munster pressing from a stolen lineout before a crucial Baldwin poach. The Ospreys had a let-off for a block by Webb when Keatley put the resulting penalty wide.

But Munster were deadly accurate on the stroke of half-time when, from a scrum on halfway, Keatley dummied past Webb and drew in two tacklers before strong running from CJ Stander and Butler gave Zebo a simple finish near the left corner.

The Ospreys fell further behind just two minutes into the second period, with Stander carrying three times as the Munster pack roared forward and Keatley then released big centre Hurley for a smart finish past Walker at the corner flag. 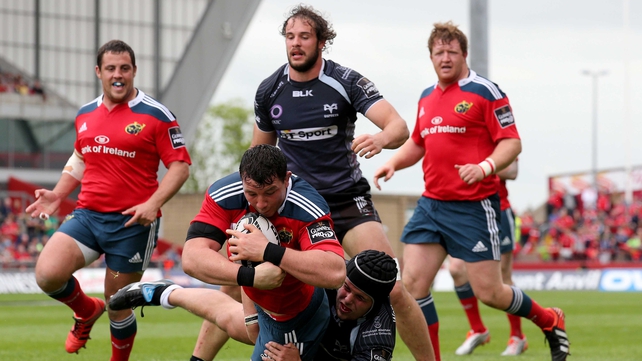 Fly-half Keatley missed both conversions and Webb responded almost immediately for Ospreys, picking off Stander's pass from the back of a scrum to sting the hosts.

Biggar was unable to convert and Stander initiated Munster's response, countering from a kick and Kilcoyne again bulldozed through before Duncan Williams' flat pass put Butler over from close range.

Keatley's conversion attempt came back off the left post and once more the Ospreys quickly answered back. The lively Hassler turned a loose Zebo kick into a terrific solo try as he burst clear from halfway and carried the Ireland winger with him over the whitewash. Biggar's conversion cut Munster’s lead down to 21-15. 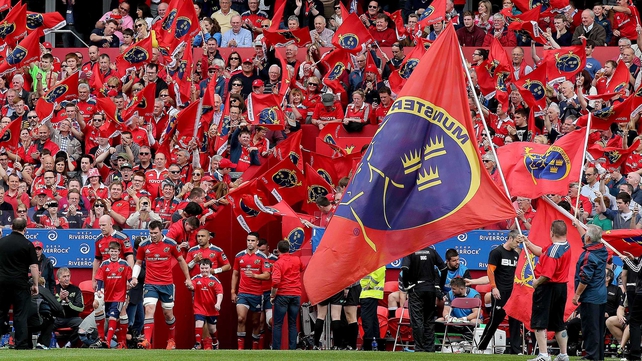 The Ospreys threatened through Hassler and Matavesi as Munster were guilty of some more loose kicking, needing some crucial interventions from Butler and Williams in their 22.

Biggar punished a ruck infringement with his second successful penalty, setting up a grandstand finish with 14 minutes left.

Munster controlled possession for the most part, but the points eluded them as Keatley and Hanrahan had penalty misses and the Ospreys did well to keep out a lineout maul.

The Thomond faithful had their hearts in their mouths as Matavesi looked to have stolen the game but Owens went back for a TMO review that showed a clear Ospreys knock-on. 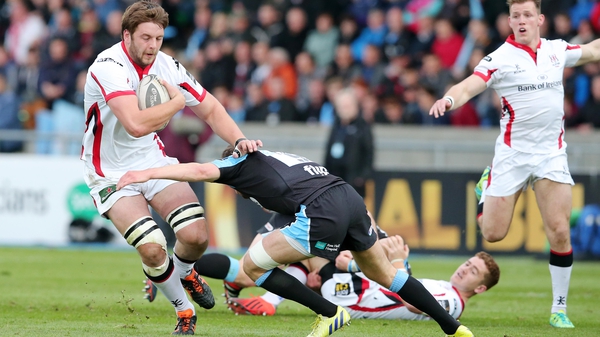