So, for the second time in a week, Ulster make the trip to Scotstoun to face Glasgow Warriors; opposition that is widely agreed to be the toughest challenge in the Pro12 at present.

Ulster head coach Neil Doak’s tactic last week was to rest the majority of his frontline players in the last game of the regular season in the hope that his first XV would have the requisite freshness to win an away semi-final and bag a spot in the final at Kingspan Stadium on 30 May.

A 32-10 thumping at the hands of Gregor Townsend’s Glasgow as a result will have done little for the squad’s mental strength, but the psychology here would appear to be to lull Glasgow into a false sense of security and that with their front liners back, Ulster can shock the Scottish side at home.

But it’s a massive challenge. Glasgow have won 19 on the bounce at home and play with a swagger on their own turf that is incredibly difficult for any team to get grips with. Ulster fronted up superbly last week to claim a 10-6 lead at half-time but Glasgow’s power and creativity with ball-in-hand proved too much in the second period.

The fact that Ulster have only won once in five ties against Glasgow is another statistic that doesn't help the Irish province’s cause.

Townsend has said previously that the teams that inspired his managerial style are Leinster (in their pomp between 2009-2013) and the All Blacks.

And his team quite obviously reflects both of those styles: a quick rucking game, defined by committing few numbers to the breakdown and clearing out efficiently, before spreading wide using plenty of forward runners in the backline. It’s a beautiful thing when done correctly and Glasgow have deployed those tactics so well this season.

So, how do you stop them? Two tactics are on the table for opposing teams: 1) Frustrate them. Slow down and mess up ruck ball and make the breakdown a sloppy affair, denying Glasgow quick ruck ball and with it time and space to exploit gaps out wide; or 2) Meet them head on with the same game plan and attempt to out skill them both at the breakdown and with ball-in-hand.

This Ulster team is full of ballers and will take option two and go all out to score tries and outplay the Scots. It sets things up for a tie of open, running rugby that will have the fans on their feet. 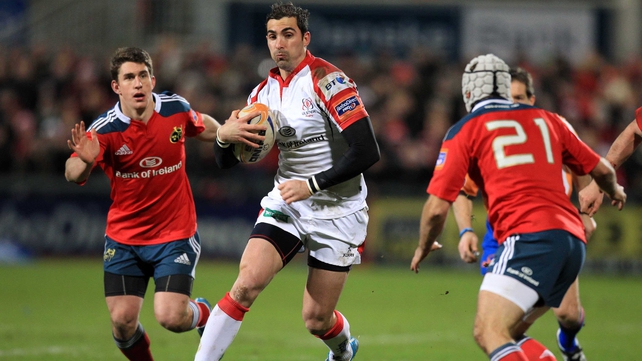 The weather forecast for Glasgow is for rain, which is another kicker into the end game. With a greasy ball the error count will be higher than usual from both these sides, the team that can adapt to the conditions and cut out mistakes, as well as capitalise on their opposite number’s errors, will get a distinct edge.

Ulster have made 11 changes from last week and Glasgow just two, but both sides know each other well so any surprise factor is out the window early.

There is so little between the sides on paper. Two massive packs with talismanic players all over the place are underpinned by superb back rows.

Outside them the story is similar in the backline. Ruan Pienaar is the best player on the pitch at nine, but Finn Russell probably just has the edge on Paddy Jackson at ten.

The same goes for 11-15 where the likes of Glasgow’s Nikola Matawalu, Peter Horne and Stuart Hogg are nip and tuck with Ulster’s Darren Cave, Craig Gilroy and Tommy Bowe.

One of Ulster’s deficiencies this year has been a desire to be creative and spread the ball at all costs but that has hurt them at times this season, most especially in their drawn home game against Munster in round 21.

They should have won that tie through being more clinical and pragmatic but their desire to go all guns blazing was too cavalier and left them exposed in the more nuts and bolts areas of the game.

Glasgow by contrast, have had cool heads just when they needed them so far this season. They may just be able to control their emotions that little bit more tonight and use their logic, rather than instinct, to claim the win.