Connacht captain John Muldoon has admitted that his team have developed a habit of starting slowly in matches during the final quarter of the season.

The Westerners went down 24-20 to Ospreys in the final round of the Pro12 regular season, and had to claw their way back from 24-0 down at half-time to secure that bonus-point defeat.

“Unfortunately, towards the last quarter of the year we’ve been a little bit loose and given away big leads and then had to chase them in the second half," Muldoon told RTÉ Sport.

“It’s been somewhat frustrating in terms of chasing the game so hard, trying to get there and we leave ourselves a mountain to climb.

“If you do that too much you’re invariably going to get caught. Earlier on in the year it happened a couple of times as well, but we conceded a little bit less than what we have over the last couple of weeks.

“It’s frustrating. We dropped the heads a couple of times after scoring and that cost us big time.”

“All the pressure is on Gloucester. Their fans are going to expect them to win the game easy" - John Muldoon

However, despite defeat to the Welsh region, Connacht still finished seventh in the league table and qualified for the Champions Cup qualifier play-off against Gloucester at Kingsholm next Sunday. The winner of that tie goes on to face the seventh-placed Top 14 team in the play-off final.

The teams met earlier this season in the Challenge Cup quarter-finals, with the Cherry and Whites coming out 14-7 winners at Kingsholm, and going on to win the cup outright.

However, Muldoon feels that Connacht have nothing to fear on their return to the West Country.

“A month and a half ago with everything to play for they battered us in the first half in the Challenge Cup and got 14 points unanswered," said Muldoon.

“Then we came out and got seven and I think we were a little bit disappointed with the tries we conceded that day.

“We’ll go over there with confidence and take the positives from the way we played in the second half against Ospreys.

“It’s all to play for. I don’t think we have anything really to fear. Going over to Gloucester we’ll be underdogs again and it’s a winner-takes-all game effectively.

“All the pressure is on Gloucester. Their fans are going to expect them to win the game easy. I think after the quarter-final they seemed to think the conditions suited us – the wet rain. We don’t like the rain. Our style of play doesn’t really suit the rain. Unfortunately, 90% of our games are in the rain, at home especially.

“A nice dry day will suit us perfectly. And it will fall into their hands perfectly as well as they have some dangerous players." 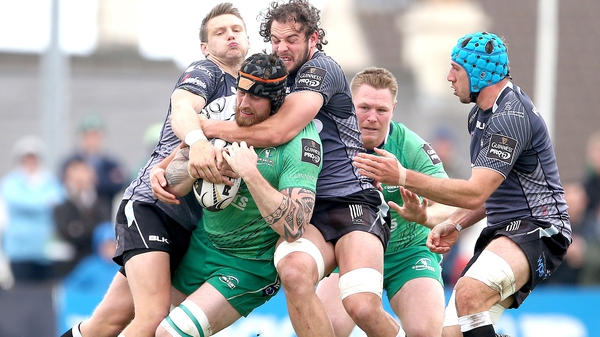