Just a single point separated Lansdowne and Clontarf at the end of a pulsating Ulster Bank League final as Mike Ruddock's men picked up their second Division 1A title in three years.

Lansdowne erased the defending champions' 17-8 second half lead thanks to a maul try from man-of-the-match Joe Swiney and crucial points from the boot of experienced out-half and former Munster player Scott Deasy.

Despite being outplayed either side of half-time, the headquarters club were clinical when it mattered most. Mark Roche's 22-minute touchdown put them 8-6 ahead at the break in front of a good-sized Aviva Stadium crowd.

Beaten in the recent Bateman Cup decider, Clontarf gave it their all but four Rob Keogh penalties, coupled with a well-taken intercept try from centre Matt D'Arcy, were not enough for Andy Wood's side in the end. 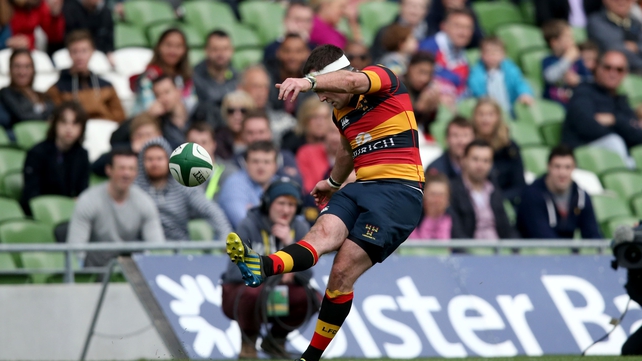 Full-back Keogh, kicking in the injury-enforced absence of David Joyce, nailed his first shot at the posts to get 'Tarf off to a positive start. They established early dominance in the scrum where Leinster prospects, Royce Burke Flynn and Peter Dooley, had a ding dong battle.

Conneely's opposite number Adrian D'Arcy soared highest to take down the restart and set Clontarf back on the attack. Their beefy scrum won a penalty as Dooley infringed, and Keogh stepped forward to make it 6-3 towards the end of the first quarter.

However, within four minutes, Lansdowne responded with the game's first try. A well-worked maul on the left earned them a penalty and Deasy, playing the advantage, hung up a cross-field kick. Ian Fitzpatrick did really well to gather it on the right wing and swiftly transfer possession to the supporting Roche who beat the initial tackler and dived in at the corner flag despite Matt D'Arcy's despairing challenge.

It was a high quality finish from Roche, one of the heroes of Lansdowne's 2012/13 league success, and the unconverted try split these Dublin rivals at the interval.

Clontarf really should have hit back before then, but they failed to finish off a right-wing break manufactured by Conor O'Brien and Colm O'Shea, while winger O'Brien just failed to hold onto a Matt D'Arcy pass as they threatened on the opposite flank soon after.

The north Dubliners were force to rejig their back-line with Evan Ryan forced off and D'Arcy moving to out-half. Ireland Under-19 international O'Brien joined O'Shea in the centre with the pacy Ariel Robles added to the wing.

Despite the disruption, 'Tarf were quickly out of the blocks in the second period. They turned the screw in the scrum again, with Lansdowne replacement prop Adam Boland, who had done well initially on his introduction, sin-binned for successive infringements.

Keogh missed the resulting long-range penalty, but nailed another effort from closer in after Dooley was pinged for not rolling away quickly enough. Just moments later, a Deasy pass was intercepted by D'Arcy who had the gas to race away over his 10-metre line and all the way to the left corner for an opportunist try.

Keogh, with bandaging over his left boot, missed the conversion at 14-8 before captain Sam Cronin, who gave 'Tarf an assured presence at scrum half, drew a penalty which Keogh clipped over with aplomb from the right.

Suddenly, Lansdowne were nine points adrift with their scrum under pressure and their overall discipline letting them down. Skipper Ron Boucher was the calming influence they needed. He rallied his troops, including the returning Boland, and they made immediate improvements with strong carries from both Dooley and McSwiney.

Boucher turned down a kickable penalty and that brave decision paid off in the 58th minute when the resulting lineout maul powered over the line with Corkman McSwiney touching down. Deasy gave his side a further boost as his difficult conversion went over off the inside of the right hand post.

The gap was down to 17-15 and Lansdowne looked to have the momentum as Clontarf's Conor O'Keeffe coughed up possession in an advanced position and a counter-attack involving Cian Kelleher eventually won what proved to be the match-winning penalty in the 67th minute.

Deasy, going from villain to hero in the space of 20 minutes, showed his class once more as he thumped over the place-kick from the right wing, much to the delight of the vocal Lansdowne support in the East Stand.

Some promising approach work by Clontarf was ruined when Daly secured turnover ball in his ’22 and it went from bad to worse for 'Tarf as Robles took out Kelleher after the Lansdowne full-back had launched a kick chase out wide. Referee Sean Gallagher brandished his yellow card.

It was still all to play for with just the minimum between them on the scoreboard and both benches in full use. Deasy dropped a penalty short from far out on the left as 14-man Clontarf hung in there, desperately searching for a chink in the Lansdowne defence.

Last year's winners did earn a late penalty just inside their half, but Keogh had been replaced at this stage and was unable to return in time. They continued to run the ball and eventually a handling error allowed Boland to boot the it to touch and Lansdowne could celebrate their 16th win of a memorable 20-match league campaign.