Peter Stringer says Bath were made to pay for their indiscipline as Leinster kicked their way into a Champions Cup semi-final.

The ex-Ireland international came off the bench at the Aviva Stadium in the second half but couldn’t help the English Premiership side overtake the home team, with six Ian Madigan penalties enough for Leinster to claim an 18-15 win.

Speaking to RTÉ Sport after the game, the former Munster scrum-half said: “It’s very disappointing, obviously, to lose in the quarter-final of the Champions Cup is always disappointing.

“Particularly when we feel we’ve played a bit more rugby. I think that little ill-discipline in the first half has cost us dearly. It left too big of a margin to come back.

“You can’t do that against a quality side like Leinster at home.

“When you are giving away penalties in the wrong area of the pitch, from our point of view, right in front of the posts and in and around the 10-metre line, a guy of Ian’s quality is always going to slot them over.

“Their experience came through in the end. I suppose we were willing to play a lot of rugby and, ultimately, we were probably playing in our half a bit too often and ill-discipline has caught us and it’s been too much for us to claw back.”

Stringer, 37, replaced Micky Young in the 65th minute and came on to the pitch he graced so many times for Ireland to a huge cheer as he made his 100th European appearance.

He said: “I suppose you reflect on it [later], you’re not really thinking about it at the time but, obviously, for me to come back here is something special, to play in the Aviva, back on Irish soil again.

“I haven’t had that opportunity in a couple of years. Ah look, it’s great to be back here but you want to win these games and that’s why I still play the game and I still want to continue playing matches.”

Leinster are now through to an away semi-final where they will face either Toulon or Wasps, who play tomorrow. 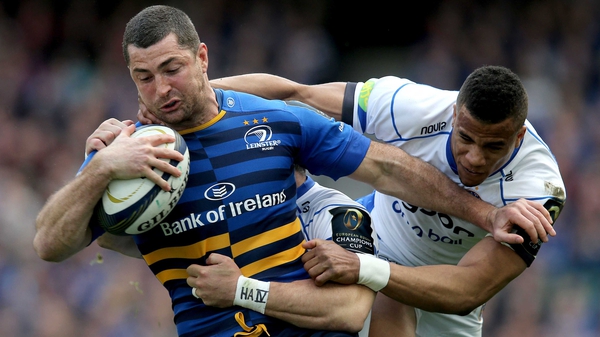