Ulster stayed on track to make the Guinness PRO12 play-offs by seeing off Cardiff Blues in a pulsating 36-17 encounter on the night flanker Chris Henry returned to playing for the hosts, four months after career-threatening health issues.

The home side bagged the vital bonus-point result and stayed in second spot after stretching their winning record in the league to all nine games played in Belfast so far this season.

It was a dramatic clash with six tries scored in total, Ulster claiming four then having their 21-0 lead cut to 21-17 before late tries from Louis Ludik - his second of the game - and Paul Marshall secured the game and brought maximum points.

Ulster opened up in ideal style when, after winning their own kick-off, Neil Doak’s charges kept possession for multiple phases before Paddy Jackson - back from injury for the first time since January - found Craig Gilroy in space and he danced over to score.

Ruan Pienaar added a second-minute conversion, though the game was then held up as team-mate Stuart Olding, on his return from injury, was stretchered off.

The game was then held up for even longer as Cardiff’s Rhys Patchell was also stretchered off with Nick Williams being yellow-carded over the incident after seven minutes.

But even with 14-men Ulster dominated and Pienaar landed a 14th-minute penalty from near the touchline.

Three minutes later and they recorded their second try with Louis Ludik barging over after the hosts had spun the ball away from a lineout maul. Pienaar failed to add the extras though and Ulster now led 15-0.

This became 18-0 on the half-hour with Pienaar's second penalty and Ulster held on to protect their lead despite the Blues blowing two tries and Franco van der Merwe being shown yellow just before the break.

Ulster began the second half well despite being down to 14 men again with Pienaar's third penalty making it 21-0.

The Blues then got off the ground with a Gareth Anscombe penalty after 45 minutes before a marvellous try from sub Tom Isaacs just after the 50 minutes stung the home side with Anscombe's conversion making it 21-10 to Ulster.

Even though Henry's appearance from the bench on 58 minutes lifted the crowd, it did nothing for Ulster's faltering composure as Alex Cuthbert scored a cracking try just after the hour with Anscombe's conversion now cutting Ulster's lead to 21-17.

Ulster badly needed a score and got it through Pienaar's fourth penalty in the 65th minute.

The score seemed to have the desired effect and the game ended with Ulster bagging two late tries, the first from Ludik and then the bonus arriving through Paul Marshall with Ian Humphreys converting. 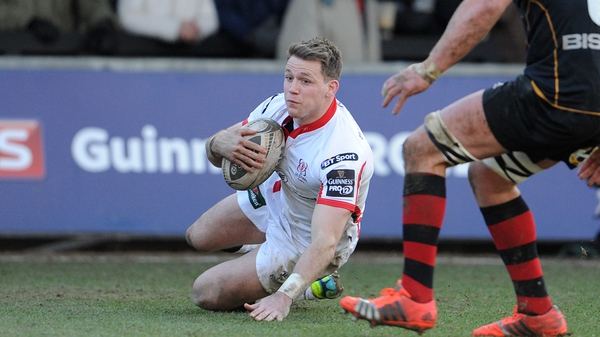