Head coach Pat Lam has lambasted one of the officials after Connacht’s agonising 17-18 Guinness Pro12 defeat to Cardiff Blues, claiming the assistant referee got a crucial late decision “completely wrong”.

Connacht lost the game at Cardiff Arms Park to a try scored in the seventh minute of added-on time by Joaquin Tuculet, converted by Rhys Patchell in the eighth minute, after several minutes of intense pressure by the hosts, which Connacht had defended stoutly.

In the third minute of added-on time, the referee appeared to blow the full-time whistle after a Blues knock-on, only for the assistant referee Leighton Hodges to intervene; Cardiff were then given another advantage, which they used ultimately to score the winning try.

Speaking to RTÉ Sport after the game, Lam made no attempt to hide his anger, and said the result was “bitterly disappointing” for him and his players.

“At 83 minutes they knock the ball clearly on. There was no ruck, our guy came from onside, cleared the ball, game over, referee called game over, and Leighton Hodges from the side made the call that was completely wrong, factually.

“So, terribly disappointed for our guys, and gutted. Because there is so much riding on this game, and to lose the game like that is just unfair.”

Lam spoke to RTÉ Sport having examined replays of the game on his lap-top, and dismissed any notion that he was speaking in the red-hot emotion of the aftermath of a defeat. He said it was not the first time that Connacht had had difficulties with Hodges.

“I only talk facts,” he said. “The ref saw it; he knew, and the call was made from Leighton.

"I would rather them score a try fairly, rather than on a call like that" - Pat Lam

"And I’ve been through the process in our game against Edinburgh, and I went through that process, about some comments he made before the game, on that, and which we were really concerned about, around his mindset ... there are some real question marks over some of the things that he is doing.”

Lam admitted that his side should have done more during the first half of the game, during which they dominated the Blues but failed to reflect this with a commanding lead on the scoreboard.

“We should have been 30 points ahead, and we blew chances, we just needed to be patient. We were clearly the dominant team there, and we just weren’t executing as well as we could have,

“And that was my biggest worry; they showed last time, if you give them time and space, they can truck it up the middle. We should have been way gone before that.

“Of course, we look at ourselves, and we do the normal process, but at the end of the day I would rather them score a try fairly, rather than on a call like that.”

Lam hailed his side’s effort, and said he was proud of them, saying: “We don’t have the most experienced players, but guys work hard for each other, and we created so many opportunities, it was disappointing that we didn’t finish.

“But we were right in that game, and it’s just gutting the way we finished.”

The loss leaves Connacht in sixth position, and though Lam admitted the manner of the defeat had affected his players profoundly, he stressed that they would use the pain of defeat in their upcoming games.

“I’ve never seen a changing-room like that. We've said we’ve got to use it. There’s nothing we can do about it, except go through the process, keep people accountable.

“I think everyone has to be accountable: ourselves will be accountable; I believe the officials need to be accountable as well. And then on the back of that, move on. We’ve got a week to get over it, and it’s obviously difficult, and then we'll get back, and we've got to prepare for Munster [on 28 March].” 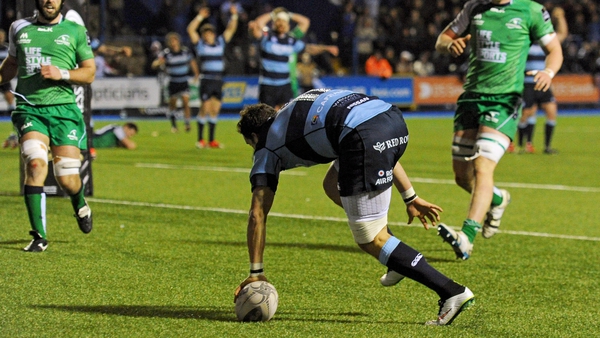