Connacht moved back into the crucial sixth position in the Guinness Pro12 table, above the Scarlets, after a 30-25 win over the Dragons.

The Welsh side played most of the game with 14 men after Rynard Landman was shown a red card in the 14th minute.

The South African second row was dismissed for a high tackle on Connacht out-half Jack Carty just 15 minutes into the game after Scottish referee Lloyd Linton looked at the big screen and consulted with his fellow officials.

It may see Landman handed a ban that could be as long as eight weeks, potentially ruling him out of the Dragons' big European Challenge Cup quarter-final Welsh derby with Cardiff Blues on 4 April.

It was part of an eventful match in which Dragons wing Hallam Amos scored two tries and centre Jack Dixon get one. Wing Tom Prydie added two penalties and converted two tries.

The Dragons went ahead when Prydie booted a long-range penalty but, after influential full-back Jason Tovey slipped awkwardly on the wet surface and limped off, Connacht raced into a 17-3 lead.

Ronaldson drove over in the middle after an attacking line-out put the Dragons under the cosh. Carty added a penalty to the conversion a few minutes later.

Landman's needless high tackle and dismissal on the halfway line wrecked the Dragons' flow as they faced an uphill task in playing the rest of the match with 14 men.

After Carty missed a couple of straightforward penalties, back row Masterson added a further five points when he drove from five metres through the desperate Dragons defence on their own line, with Carty kicking another two points.

The frustration of the afternoon boiled over when both packs got to grips with each other but the Dragons had the final say of the half.

Welsh international Amos went diving through the mud and over the Connacht line after a move right from the base of a ruck.

Linton checked for crossing by home centre Jack Dixon but ruled he had not interfered with play and granted the Dragons their touchdown.

But it looked like Connacht would inch their way to a comfortable victory as the Dragons gave away a couple of penalties within reach of Leader, who took over the kicking duties when Carty went off.

As much as the rain tried to ruin the game, handling was excellent for the most part by both sides.

But the Dragons kicked on again and, despite their disadvantage, they got to within five points when Dixon scrambled his way over down the right from a well-worked move.

It seemed like the Welsh outfit could secure an unlikely win but Connacht wrecked those hopes as Kearney charged down an attempted clearance inside the Dragons 22 and followed up to pounce on the ball. 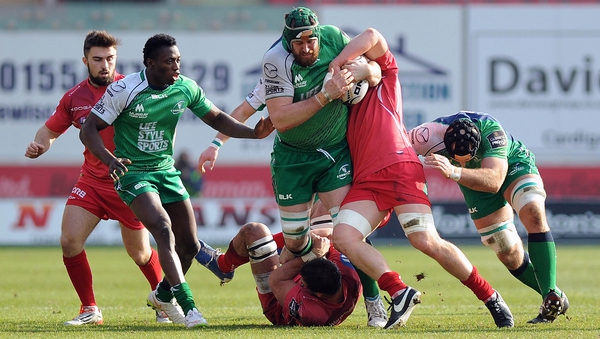