New captain Niamh Briggs has said a much-changed Ireland squad has a number of leaders ready to step up and fill the void left by several high-profile retirements in the forthcoming Six Nations Championship.

Ireland have lost several talismanic players to retirement, including former captain Fiona Coghlan, Lynne Cantwell and Grace Davitt, as they head to Italy for their opening game on Friday (kick-off 1800). This group was central to the remarkable progress made by the Ireland team in recent years.

For Briggs, the absence of this trio marks a new chapter in her international career, and an opportunity for this group of Irish players to write their own names into Irish history.

“Every camp I’ve been to, it’s always involved those three players, so it was a bit hard to come into a camp and not see them,” she said.

“But look, they were massive leaders for us, they were great. They really pushed women’s rugby to a whole new level in Ireland.

“For us, though, it’s important that we don’t fill their boots; it’s that we just make a void to be leaders ourselves.

“I think that we’ve done that. We’ve had girls that stepped up, who have never really had that responsibility before, and are really showing it the last few weeks of camp. So, it’s great, it’s brilliant to see that.”

Briggs said that former coach, Philip Doyle, who left after Ireland’s remarkable run to the semi-final of last year’s World Cup, had the team on the right path and that Tierney had not changed too much.

“They haven’t changed a lot, because it’s hard to change that much in a short space of time. But they’ve stamped their stamp.”

Another change to have occurred since Ireland’s last competitive game, of course, is Briggs becoming Ireland’s captain, a development she described as “a bit of a shock”.

Briggs was keen to stress, though, that Ireland now have many leaders in their ranks.

“We’ve got so many leaders in this squad that it could have been anybody,” she said. “I think that’s really important, that we don’t get too carried away about it.

“We’ve got an amazing pack; any of them could have stood up and done it, and I know they will do it. [We’ve also got] a good nine and ten, that can be leaders as well.”

First up for this new-look Ireland is Italy at the Stadio Mario Lodigiani in Florence on Friday. Ireland demolished the Italians 39-0 last year, and sealed their Grand Slam in Milan in 2013, Briggs kicking the winning penalty on that occasion. This time, though, she predicted a closer tie than last year’s one-sided encounter.

“It definitely won’t be a massive score,” she said. “I don’t think they did themselves justice [last year]. Every time we’ve played in Italy there’s only been a score or two in it, and I think it’s really important for us [to keep in mind].

“We haven’t really spoken about [posting a score]. It’s just going to be important that we keep trusting in ourselves, trusting in the game plan that Tom and the lads have put in place, and hopefully we’ll get the right result.”

In general, Briggs was champing at the bit to get back out on the pitch, and get playing again.

“I can’t wait. It’s been a long time coming since the last time we played together. It’s going to be a challenge, but it’s definitely one we’re looking forward to.”

The match will be streamed live on RTÉ.ie via the Italian Rugby Federation's Youtube channel. 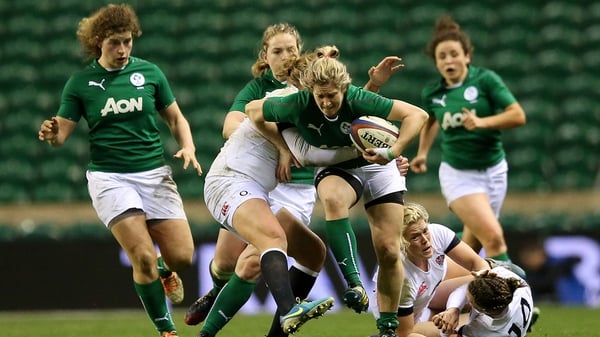