Matt D’Arcy heated up a bitterly cold Belfield Bowl with a terrific hat-trick of tries as Clontarf claimed a 38-17 bonus-point win over UCD in Ulster Bank League Division 1A.

D’Arcy, who could play an important role for the Ireland Club international team in the coming weeks, scored three of Clontarf’s six tries against a College side that was missing eight Ireland Under-20 internationals, including the likes of Garry Ringrose, Billy Dardis, Ross Byrne and newly-appointed captain Nick McCarthy.

It was a vital result for the defending champions after their 35-0 hammering by high-flying Lansdowne last time out. It was UCD who hit the front inside five minutes as Rob Keogh’s poor clearance kick was run back and centre Stephen Murphy was fed for a sidestepping run to the line.

Liam Bourke, kicking in the absence of Byrne, converted before ‘Tarf replied in the 11th minute. D’Arcy’s initial chip gave them good field possession and a subsequent break from the centre, coupled with a nice offload from prop Royce Burke-Flynn, put winger Rob McGrath over for the visitors’ opening seven-pointer.

There were near misses as Bourke sent a penalty wide and D’Arcy knocked on an attempted intercept. The swirling wind nudged the ball off the tee for another Bourke penalty attempt - his drop-kicked effort sailed wide - but the UCD out-half nailed a 25th-minute kick from the left touchline for a 10-7 lead.

Clontarf looked the more fluent side approaching half-time and they edged ahead (12-10) when hooker Rory Litchfield barged through the heart of the UCD defence, the ball was quickly moved wide and the supporting Liam Og Murphy put D’Arcy over for an unconverted try. 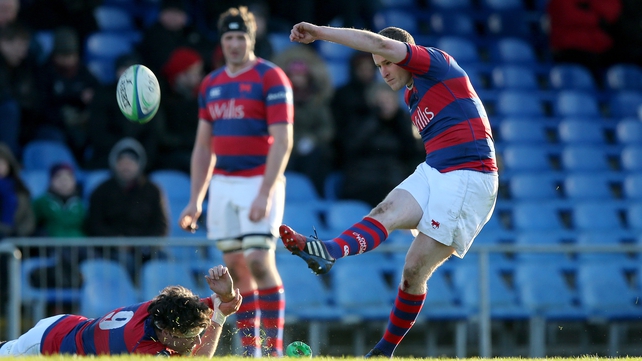 Sam Coghlan Murray missed an opportunity to combine with the overlapping Adam Byrne when he was held in a tackle and Jordan Coghlan then knocked on inside the ‘Tarf 22 as the UCD errors began to mount.

Tellingly, the visitors enjoyed a purple patch on the restart as the ever-willing D’Arcy dashed 60 metres downfield - taking advantage of a Conall Doherty slip - to touch down to the right of the posts. David Joyce added the extras.

UCD were denied once more by a knock-on as they attempted to capitalise on a Karl Moran sin-binning, while replacement Doherty also went close as the north Dubliners dug deep in defence.

After a Joyce penalty miss, ‘Tarf secured the bonus point when good hands released D’Arcy to go over unopposed for his eighth try of the campaign which Joyce converted. The latter was duly replaced with those Club international fixtures against Scotland and France coming up over the next few weeks.

UCD gave way again when young Clontarf loosehead Ivan Soroka grabbed their fifth try of the day. A consolation try from Tom Fletcher followed before Andy Wood’s men had the final say, with scrum-half Sam Cronin sniping over from the back of a ruck.

Leaders Lansdowne also chalked up another bonus point, registering their eighth league victory on the trot as they overcame Ballynahinch 39-18 on the Aviva Stadium’s back pitch.

‘Hinch made the early running thanks to an Aaron Cairns try, and two booming penalties from Chris Quinn had them leading 13-10 with the interval in sight. But Mike Ruddock’s men fought back to lead 22-13 at the break and Ross Adair’s seventh league try was ‘Hinch’s only score of a one-sided second half.

Lansdowne’s firepower is proving too much for their play-off rivals at present, with 74 points scored in their last two games.

They were helped along the way today by a first-half penalty try, but their backs were in match-winning form again with deadly duo Tom Farrell and Cian Kelleher, along with replacement Foster Horan, touching down and Tyrone Moran and fit-again Leinster ‘A’ lock Tadhg Beirne completed the six-try haul.

The Dubliners remain second-from-bottom but are now six points clear of Dolphin and just two behind eighth-placed Young Munster. Although Mary’s fell behind to an early Tomas Quinlan penalty, the wind-backed Cork Con out-half was off target with a series of other kicks.

That allowed the visitors to take a 10-3 lead into the break, scrum-half Dave Fanagan collecting a try against the run of play in the 29th minute and full-back Ray Crotty supplied the other five points.

Tom Tierney’s men got on top during the third quarter, though, with Quinlan converting a 46th-minute penalty and after three scrums close to the Mary’s line, a hard-earned penalty try was turned into seven points by Quinlan.

However, Constitution were left stunned when elusive right winger Ryan O’Loughlin sidestepped his way through for Mary's' second try of the afternoon and the hosts could not erase the two-point deficit during a tense forwards-dominated finale.

Old Belvedere also picked up a morale-boosting victory at home to Young Munster, racking up four tries as they ran out comprehensive 38-18 winners over the Cookies at Anglesea Road.

The result lifts ‘Belvo up to seventh in the standings and keeps them within four points of the play-off positions - Cork Con currently occupy the last spot. It was certainly a day to remember for Paul Cunningham’s side as they put an end to their five-match losing streak.

‘Belvo, who bagged an early penalty try, were 13-0 to the good by the time Gearoid Lyons slotted a 22nd-minute penalty for Munsters.

A Cathal O’Flynn try widened the margin to 23-8 by half-time and further touchdowns from industrious lock Conor Owende and star full-back Daniel Riordan had the hosts out of sight. Winger Glynn kicked 18 points in all, taking his tally for the current league run to 99.

Terenure College benefited from some clinical finishing as they made it back-to-back successes in the top flight with a 31-18 dismissal of bottom-placed Dolphin at Lakelands Park.

Second-placed ‘Nure, who are seven points behind Lansdowne and seven ahead of ‘Tarf, stayed on course for the semi-finals as centre Stephen O’Neill created the openings for firs-half tries from Ian Hanly and Harry Moore (his eighth of the campaign).

Just three minutes later, Terenure responded as excellent approach work by Kevin and Mark O’Neill teed up lock Kevin O’Dwyer for his side’s third converted try. But the Corkmen hung in there thanks to a well-taken five-pointer by replacement prop Ken O’Halloran.

Having replaced Mark O’Neill at out-half, Jake Swaine then took centre stage by running in Terenure’s bonus point score which he converted himself. O’Neill returned to replace his brother Kevin O’Neill at scrum half and his late penalty confirmed the 13-point winning margin.

Garryowen remain just a point behind Division 1B leaders Galwegians, but they had a major scare before squeezing past Belfast Harlequins 17-16 at Dooradoyle this afternoon.

A penalty try, awarded in the final minute, which Jamie Gavin converted, gave the Light Blues a victory they scarcely deserved. The score came as they launched a final bid and with a player already in the sin-bin, ‘Quins had been warned not to offend. When they did just that in the next phase, the try was awarded and Gavin popped over the decisive conversion.

On a day not suited to place-kicking, out-half Gavin, who is normally very reliable off the tee, was off target on five occasions. The visitors swept into an 11-0 lead thanks to a try from winger Mark Glover and two penalties from the boot of Ulster scrum half Michael Heaney.

Prop Ben Rowley’s try gave Garryowen a timely boost in the 33rd minute and Munster talent Shane Buckley followed up with another unconverted effort to reduce the arrears to a single point. Winger David McMaster’s sixth touchdown of the campaign looked to have secured a surprise win for ‘Quins until the late drama unfolded.

Ballymena got back to winning ways at their Eaton Park base, bagging a bonus point in the process as they overwhelmed UL Bohemians 33-10.

In tough conditions, with a strong wind blowing down the pitch, Bohs took the lead when a chip ahead was gathered by left winger Tim Rafferty. However, the Braidmen replied with two tries before half-time as John Andrew and Dave Shanahan both crossed the whitewash and Ritchie McMaster added the conversions.

With the wind at their backs on the resumption, Andy Graham’s men took a firm grip on proceedings as tries from Paddy James and Ulster prop Andrew Warwick, in addition to a penalty try, saw them coast clear on the scoreboard.

UL, who have now lost four matches on the bounce, managed to get into double figures in the closing stages, as a spell of pressure led to their Munster-capped hooker Kevin O’Byrne reaching over the line.

Meanwhile, the Dublin University juggernaut rolled on at Gibson Park where the students made it ten games unbeaten thanks to a stylish 41-19 triumph over a stunned Malone outfit.

Full-back Conor Kearns had a fine game, kicking accurately off the tee and it was his 60-metre burst that set up the opening try for number 8 Tom Ryan. Malone got back on level terms via a penalty try and a Nathan Brown effort in response to Trinity’s second touchdown from Sebastian Fromm.

American winger Tim Maupin, who provided the assist for Fromm’s score, dotted down himself before the break to edge the visitors into a 19-14 lead and there was only one team in it after that. Further tries from back rowers Ryan and Brian du Toit, coupled with a penalty try, ensured a five-point return for Tony Smeeth’s youngsters.

Trinity are now within three points of the summit and their promotion bid has huge momentum behind it, ahead of February’s key clashes with Garryowen (home) and Shannon (away).

Shannon themselves gained a positive result at home to struggling Corinthians, with a David O’Donovan splitting the sides at 15-12 in Coonagh. The sides shared out four tries with Lee Nicholas and Dave Evans on the mark for Shannon and Dwayne Corcoran and Marc Kelly crossing for the Galway men.

On Friday night, centre Gary O’Brien struck for the decisive try while Connacht’s Shane Layden was in the sin-bin as table toppers Galwegians beat Buccaneers 12-6 in a tight provincial derby at Crowley Park.

Two penalties from Alan Gaughan gave Buccs a 6-0 interval lead as ‘Wegians struggled to convert their dominance up front into points and fell foul of referee Gary Conway’s whistle.

However, a couple of yellow cards helped the Galway men score at crucial stages. Buccaneers winger David Butler was binned for taking Connacht scrum half Caolin Blade out in the air. The latter then provided an inviting pop pass for centre Rory Parata to run in the game’s first try.

Aidan Moynihan added a tremendous conversion and with Layden following Butler off the pitch for a deliberate knock-on, ‘Wegians wrapped up the match points with a close range effort from replacement O’Brien.