Sean O'Brien made a successful return from shoulder surgery for the Wolfhounds on Friday and Ireland must now decide whether he is ready for their Six Nations opener against Italy in Rome on Saturday.

O’Brien, who has been out of action for 14 months, apart from one Pro12 appearance, played more than half of the Wolfhounds’ 18-11 loss to England Saxons in Cork last night.

"I got 50 minutes under my belt and I was just happy to be out there. Ideally I'd like more game time before Italy, but there aren't any more opportunities," O'Brien said.

"I'd usually like to get two or three games under my belt, but with the short window that's not possible.

"There was no reaction on the shoulder and that will give me confidence. I took a few good hits so I'm happy enough."

Meanwhile, the IRFU has confirmed that Mike McCarthy suffered a concussion and will undergo return to play protocols, Fergus McFadden took a bang on the ribs, while Luke Fitzgerald, who was named to start, suffered a stomach bug before the game.

"I'd usually like to get two or three games under my belt, but with the short window that's not possible" - Sean O'Brien

Wolfhounds captain Felix Jones tried to put a positive spin on the outcome, but admitted that the performance of the A side left a lot to be desired.

“There were plenty of positives there,” the Munster full-back told RTÉ Sport.

“We had players coming back from injury, like Sean O’Brien had a great game, Keith Earls back in a green shirt again. While it is massively disappointing we’ll take a few positives away from it.

“The likes of Andrew Conway and Eoin [McKeon] coming in, getting his first game with Ireland A.

“Obviously, [it's] very disappointing to lose the way we did. I think we were right in it until about 78 [minutes]. We had a pretty pivotal moment under their posts about 72 where we turned the ball over and they ended up coming 80 metres back down the field, so yeah, massively disappointing.

“Continuity-wise, we were probably a little bit disjointed. That has to do with coming into the camp, problems coming together, but to be fair to the Saxons they were in the same boat.

“There was a bit of dew, the ball was a bit slippery as it went on but that’s probably fair [to say that the error count was too high].” 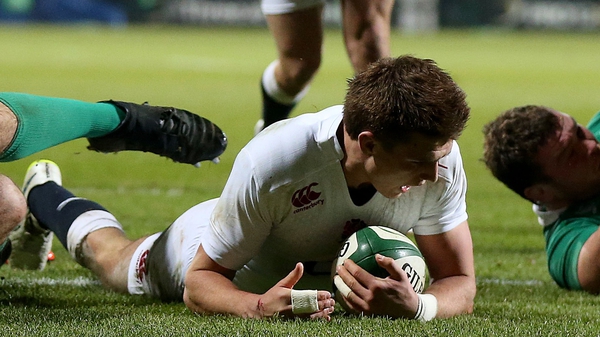 Ireland Wolfhounds fall to the England Saxons in Cork