Keith Earls has refused to interpret his selection at outside-centre for Ireland Wolfhounds' clash with England Saxons on Friday (Live on RTÉ 2, 1930) as any kind of RBS 6 Nations hint.

Sean O'Brien is back in Ireland colours on Friday after 14 months of shoulder trouble, but even the Leinster flanker's injury ordeal pales slightly next to Earls' record.

The 39-cap Munster back has battled a string of knee and groin injuries since his last Test cap, in Ireland's 22-15 Six Nations defeat to Italy in March 2013.

Luke Fitzgerald's selection on the Wolfhounds' wing suggests boss Joe Schmidt could favour Earls at 13 for Ireland's Six Nations opener in Rome on 7 February, with Jared Payne also in contention.

Earls himself was simply relieved to complete a full week of Ireland training unscathed.

"I've been in here a few times but haven't lasted the week with injuries and what-not," said Earls.

"I'm just happy to be injury-free at the moment. It's been the bones of two years, so I'm very excited.

"It's great to get through the week and put my hand up for selection - I don't care what position it is in.

"I think going by the way Joe [Schmidt] has worked the last year, he picks his squad and anyone can come in at any stage.

"Ian Madigan didn't play the first few games last year but he came in and was involved in the last game against France, so I don't know what will happen really to be honest.

"We're blessed with a lot of backs who can play in multiple positions, so to go out and beat England Saxons, that's all we're worrying about."

"I'm just happy to be injury-free at the moment. It's been the bones of two years, so I'm very excited" - Keith Earls

There is no place for Cian Healy, however, who is still battling hamstring problems in the hope of returning to action during the Six Nations.

Fergus McFadden slots on to the wing for the Wolfhounds, echoing Earls' sentiments it is a dangerous game trying to second-guess Ireland boss Schmidt.

"After being coached by Joe at Leinster and now here for a few years you'd think I'd know him a bit better as well. But not really to be honest with you, he's quite hard to read," said McFadden.

"At this stage I've just gotten to the point of trying to do what I do best, and whatever team Joe picks next week will be the team he thinks is best to beat Italy. So I'll just look to do the best I can against the Saxons.

"There's a good few people in that boat, everyone's looking at chasing selection for Italy. And Joe has really spoken to us about that and highlighted what an opportunity it is for us.

"It's a strong Saxons team as well on a good track in Cork, so it's a pretty good fixture to play in." 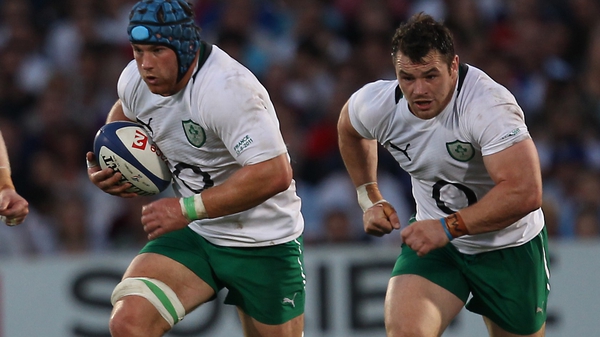