Leinster survived a late Wasps fight back to book their place in the Champions Cup quarter-finals despite a 20-20 draw in Coventry.

Despite the dramatic finish, a draw means Leinster are not yet out of the running for a home quarter-final and must see how results unfold over the weekend.

Andy Goode failed with a last-gasp drop-goal attempt that would have sent Wasps through to the knockout phase, allowing Ian Madigan to wipe his brow.

The Leinster centre was relieved that his four missed penalties did not cost Matt O’Connor’s side safe passage at the Ricoh Arena.

Wasps edged out Harlequins into second place in Pool Two on points aggregate between the two sides' meetings.

Dave Kearney's shoulder injury and Eoin Reddan's knee knock could prove troublesome for Ireland boss Joe Schmidt however, with the Six Nations opener in Italy just a fortnight away.

The Ireland wing soldiered on for another two minutes, but was withdrawn nursing his left shoulder.

South African Johnson was probably fortunate to receive merely a yellow card for his crude but unintentional challenge.

Madigan slotted the touchline conversion with ease to set Leinster seven points to the good.

Madigan had a straightforward shot at the posts in near-immediate response, but dragged his effort wide. 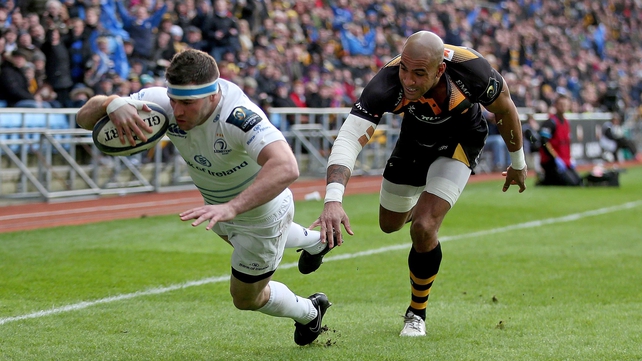 Johnson returned from the sin-bin with Wasps trailing just 7-3, but the hosts still could not settle.

Madigan missed a second penalty shot, then compounded that error by chipping out on the full under no pressure.

The 25-year-old set Leinster back on the front foot with a neat break, but his refusal to oblige a three-man overlap cost his side a try.

Madigan did convert a penalty shortly afterwards to move 10-3 ahead, but Leinster were still ruing an opportunity missed.

Leinster scrum-half Reddan then trudge off with apparent knee trouble, before Wasps prop Cittadini was sin-binned for killing the ball.

Kiwi outside-half Gopperth then assumed the goal-kicking duties to nudge Leinster 13-3 ahead.

Goode responded in kind from the tee with Cronin offside at the ruck, before scrum-half replacement Boss claimed an opportunist's try for Leinster.

Gopperth thought he had scored after ignoring an overlap, but TMO Herve Dubes awarded the score to Boss from an earlier snipe to the line.

Madigan took back the tee to slot the conversion and move Leinster into a 20-6 lead.

And so the scores remained at the break, but Leinster turned around a man light after Kane Douglas' rustic shoulder charge on Johnson.

Goode inexplicably missed the routine penalty, leaving Leinster in charge at the break.

Tom Varndell thought he had dragged Wasps straight back into the mix by sneaking into the left corner on the restart, only for Nathan Hughes to be penalised for obstruction.

Leinster escaped the sin-bin unscathed as a result, a feat to underline the visitors' dominance until the hour.

Madigan had the chance to stretch Leinster's lead, but duly missed his third penalty of an off-kilter afternoon from the tee. 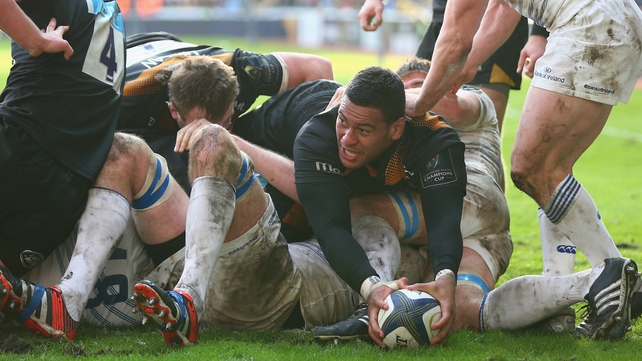 Wasps raised the tempo in a sustained bid for a foothold, but Luke Fitzgerald produced an astute tackle on Varndell that typified the visitors' stubborn resistance.

Goode's conversion cut Leinster's lead to 20-13 with the final quarter still to unfold.

A loose kick dead from Gopperth gifted Wasps the immediate initiative, and the hosts gleefully accepted with their second try.

Goode struck the post with the conversion, only to be handed a second chance courtesy of an early Leinster charge.

The former England marksman grabbed the reprieve and levelled the scores, with nine minutes to play.

Gopperth snatched at a drop-goal attempt as Leinster rallied, but stood it up in his haste to strike.

Madigan had the chance to snatch Leinster the lead after Elliot Daly hit a ruck from the side, but dragged his penalty wide for his fourth miss of the day.

Goode lined up the final-play drop-goal effort in a desperate bid to upstage the visitors, only to drag his effort wide and send Leinster through.

Wasps must now wait for the rest of the weekend's action to see if they progress as a best-placed runner-up, but that looks unlikely. 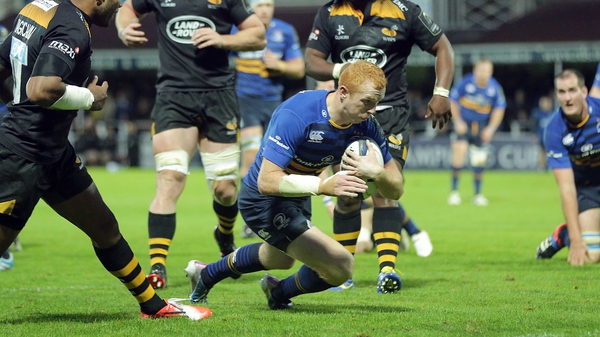