Qualifying for the knock-out stages of the Challenge Cup would be just rewards for Connacht’s progress this season, according to prop Nathan White.

The 33-year-old, who this week signed a new two-year contract with the province, will start against La Rochelle on Saturday (5.30pm) as Connacht bid to reach the quarter-finals.

La Rochelle currently lie bottom of Pool 2 and are also propping up the table in the Top 14, while Connacht, denied top spot last Sunday by defeat to Exeter, can qualify as one of the best runners-up if they manage a bonus-point win.

White told RTÉ Sport: “It would be huge for the province. Our game has certainly developed so it would certainly cap off the way we’ve been playing. It has been fantastic. We all want to play finals footie. Get into those knockout stages and anything can happen.

“For a prop there’s no bigger challenge than going to France and playing a French team in their own back yard so [we’ll] go over there and get into them and hopefully get the result and get in to the quarter-finals.

“It will be a tough day at the office, they’re a big pack. Especially at home, they’ve had some good results there this year so to go and get one over there it’s going to be tough but it’s something we’re really looking forward to. I think we can do it.”

"We all want to play finals footie. Get into those knockout stages and anything can happen"

New Zealand-born White was on the cusp of winning an Ireland cap in the autumn before suffering an arm injury at training.

With the Six Nations just around the corner and a World Cup on the horizon, White is eager to get back in the frame for selection for Joe Schmidt’s side.

“It will take a lot [to get back into the squad],” he said. “Obviously with the World Cup there’s a big carrot dangling in front of you. That’s something I really want to play in so I’ll be working hard to get it.

“I’ve done all the off-field stuff now so it’s about getting back on the pitch and playing and doing my best out there. Getting back in the groove because I was going along quite nicely before the injury so getting back to that sort of level [is important].

“It was obviously very disappointing [to get injured at that time] but, I guess, looking back it was nice to get there and know you weren’t too far off so it gave me the determination to spend the ten weeks I had off working really hard to try and get back there.”

The former Chiefs and Leinster player also hailed Connacht’s progress under Pat Lam and welcomed the announcement that the coach has extended his contract.

“I think there’s a great deal of talent here. In the two years I’ve been here so far it’s a completely different place from when I turned up. Pat’s done a great job with the style of game he’s played.

“He’s got the players behind him as well. Players are backing him and the game has really developed.

“You look through the squad and everybody’s relatively young so it going to be basically the same guys for the next three years for Pat. That consistency will pay off in the long run.” 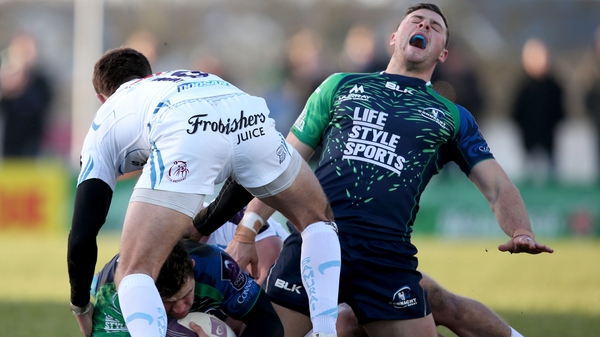 Robbie Henshaw and Craig Ronaldson out for Connacht