Tony Ward believes that JJ Hanrahan's decision to leave Munster is the right choice for him but a big blow to the province.

The 22-year-old Kerryman announced on Wednesday that he will join English Premiership champions Northampton Saints at the end of the season.

"It was a really difficult situation for him. Competing with Ian Keatley, not getting first-team rugby," said RTÉ rugby analyst Ward.

"Then having the offer from Northampton Saints, a top English club, which is a great opportunity.

"I'm sure he really had to wrestle with his conscience to make the decision, because he is very much a Munster man at heart.

"It's probably the right move in the circumstances. It's significant that a two-year extension for Keatley has been announced on the same day, so clearly Keatley is the Munster outhalf going forward.

"It's a great opportunity for Hanrahan, but I'm sure it was a very difficult decision to make."

Ward believes Munster could have accommodated both Keatley and Hanrahan in the starting line-up.

"It's disappointing, but from JJ's point of view you can see why he's made the decision." - Tony Ward

Hanrahan is primarily an outhalf, but can also play fullback and centre. He has started some games at 12 for Munster recently.

"You'll always have that argument [that they could have tried harder to keep him]," said Ward.

"I think he is potentially a very good number 12 so, particularly at a time when Munster are struggling for creativity in the middle of the field, there was a real possibility of developing Keatley at 10 and Hanrahan at 12.

"I know he's not big in terms of ball-carrying to the gainline but I think he's a real footballer.

"Munster will be very disappointed that he's made this decision. They would have looked at that [pairing him with Keatley] as a real possibility but unfortunately it's not to be.

"It's disappointing but from JJ's point of view you can see why he's made the decision. I hope it works out for him but it is unfortunate for Munster rugby."

Hanrahan's team-mate Felix Jones said that while the players were disappointed to see Hanrahan leave, they understood his reasons and wished him well.

"But I can see his reasons why he wants to go and no-one here would be begrudge him, everyone would wish him well.

"He's a great player. Any club is lucky to have him.

"You grow up dreaming of playing for your province but unfortunately, in professional sport, sometimes things don't work out" - Felix Jones

"On the flip-side, we've got some great players coming through, with Keats [Ian Keatley] signing on again, and the likes of Jack O'Donoghue coming through.

"It must have been a very difficult decision for JJ," he said. "He's a proud Kerryman and proud Munster man.

"You grow up dreaming of playing for your province but unfortunately, in professional sport, sometimes things don't work out the way you might have initially thought. 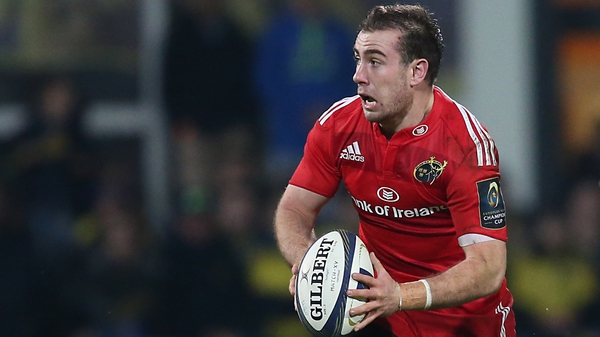