The New Year brought some surprise results as former leaders Terenure College lost at home to Cork Constitution and bottom side Dolphin picked up their maiden win - at the 11th attempt.

Tries from half-backs Gerry Hurley and Tomas Quinlan proved decisive at Lakelands Park as Cork Con beat Terenure 21-7 to consolidate their current place in the Division 1A play-off positions.

It was a disappointing start to 2015 for a 'Nure side who also suffered recent defeats to Lansdowne, Ballynahinch and UCD, and who lost ground now means they are seven points behind table-topping Lansdowne.

Terenure out-half Mark O'Neill sent an 11th-minute penalty wide during a strong opening from the home side.

Constitution full-back Darragh Lyons then looked set to touch down from a neat kick by Quinlan, only for referee Dudley Phillips to award a penalty to Terenure for a Con infringement.

The visitors were growing in confidence, though, and despite losing influential number eight James Ryan to injury after 25 minutes, the Leesiders opened the scoring just shy of the half hour mark.

Young out-half Quinlan made no mistake with a long-range penalty. His second successful strike, in the dying minutes of the half gave Tom Tierney's men a 6-0 buffer at the break.

The gauntlet had been thrown down to 'Nure, who were aiming to avoid a fourth defeat in five games. They remained on the back foot when play got back under way, and Con flanker Graeme Lawler went close to scoring a try three minutes in.

Significant breaks by Harry Moore and Kyle McCoy on 50 minutes got 'Nure moving again, though, and there was greater purpose to their play once more.

Mark O'Neill opted for touch rather than the posts three minutes later and this proved to be a wise decision, as hooker Robbie Smyth finished off a powerful lineout maul to secure the day's first try.

A confident conversion by O’Neill edged 'Nure into a 7-6 lead and set up an intriguing conclusion. The home team could not push on from there, however, and when Quinlan's 62nd-minute penalty helped Con to reclaim the advantage, the Cork outfit built some serious momentum.

'Nure were still in contention with 11 minutes left to play, but Hurley left them in an ominous position when he raced on to his own chipped kick to touch down underneath the posts. Quinlan converted and then benefitted from some superb approach play by Hurley to dive over in the left corner for his side's second try.

Quinlan's touchline conversion and a 77th-minute penalty were both short of the target, but those scores were not needed as Constitution picked up a very valuable four points on the road.

Meanwhile, UCD kept up the pressure on the four teams ahead of them in the race for a play-off spots with a 31-24 victory over Ballynahinch in Belfield.

Garry Ringrose excelled on both sides of the ball for College who attacked at every opportunity and might feel they left a try-scoring bonus point behind them.

Down in Cork, Dolphin finally put a stop to their winless streak with a gutsy 12-11 defeat of seventh-placed Young Munster.

Steve Ford's side failed to score a try in this provincial derby, but four well-struck first half penalties from Munster-capped out-half Rory Scannell proved to be enough in the end.

There was no real pattern to the game in a disjointed start, although Scannell settled the early nerves by converting a 30-metre penalty in the ninth minute. He added a second one just two minutes later.

This round 11 fixture began to open up in the second quarter during which Scannell and Gearoid Lyons swapped penalties, before a fourth successful kick from the former gave Dolphin a 12-3 interval lead.

Connacht recruit Shane O'Leary showed his class when running in a superb 60-metre try on the resumption. The centre picked up a loose ball in his own half and raced away to score in the corner for Young Munster.

The conversion was missed but Lyons followed up with a 58th minute penalty to make it a one-point game entering an intriguing final quarter.

It was all hands to the pump for Dolphin defensively, as Munsters mounted attack after attack.

The visitors missed a long range penalty with four minutes left and Ford's charges managed to hold on for a morale-boosting result which leaves them just three points behind St Mary's at the foot of the table.

It is very tight at the top of Division 1B with just four points separating the leading four clubs.

Galwegians' lead is down to just a single point as their early season form appears to have suddenly deserted them. They suffered their second successive defeat when going down 18-3 at home to a fired-up Shannon team.

Shannon, with just three wins before Christmas, started the brighter and took an early lead courtesy of Tadhg Bennett's second-minute penalty. However, Galwegians were soon on level terms when a 30-metre penalty was slotted over by full-back John Cleary.

The Blues were getting on the wrong side of referee Will O'Connor who, with the first quarter barely up, lost patience and duly sin-binned 'Wegians tighthead prop Doron McHugh. The hosts held out at a five-metre scrum, although Bennett soon restored Shannon's three-point lead.

'Wegians were struggling to find any rhythm, although there were somewhat unfortunate not to grab the opening try when returning centre Brian Murphy burst through the middle, only to be pulled back for a forward pass.

The turning point of the game came on the half hour when the Blues were camped in Shannon territory. Despite losing forwards Lee Nicholas and replacement prop Kevin Griffin to the sin-bin, Shannon kept their try-line intact. 'Wegians number 8 Anthony Ryan picked and went too early and the seven-man Shannon scrum somehow turned the ball over at the next set piece to relieve the pressure.

It was a game-changing moment and it got even better for the visitors on the stroke of half-time. With the 'Wegians lineout misfiring, Shannon stole lineout ball near the hosts' 22 and with the covering Colin Conroy gambling on a tackle and missing his man, David O'Donovan was sent over for the game's opening try and an 11-3 interval lead.

Galwegians continued to miss opportunities on the resumption, including a Cleary penalty miss, and the confidence appeared to visibly drain from the home side.

Back to their full complement, Shannon were simply hungrier and more determined, with out-half Bennett dictating play and putting in some good relieving kicks. O'Donovan was denied a second try by an excellent cover tackle by Cleary.

That score eventually came in injury-time when young full-back Stephen Fitzgerald was sent clear on the right, and he sauntered in unopposed. Replacement Ronan McKenna's easy conversion capped off a morale-boosting success for Ian Sherwin's charges who are now up to seventh in the league standings.

Elsewhere, Ballymena kept the pressure on Galwegians in second place as they came from behind to beat Ulster rivals Belfast Harlequins 17-13 at Eaton Park.

Andy Graham's men were made to fight all the way for their eighth victory of the campaign, which hung in the balance until winger and man-of-the-match Jordan Foster touched down with only four minutes left.

Ritchie McMaster converted that try and Stephen Mulholland's effort earlier in the second half as the hosts fought back from a 13-3 half-time deficit. Harlequins' points came from a Rory Scholes and his Ulster colleague Michael Heaney kicked a conversion and two penalties.

It was a pleasing performance from the Cregagh Red Sox, whose other try was scored by nippy scrum half John Creighton and winger Neil Burns had a 12-point contribution off the kicking tee.

When Garryowen and Buccaneers met in September they shared out six tries. The same amount were scored at Dooradoyle today where the Light Blues prevailed on a 28-20 scoreline.

It was a rewarding afternoon's work for Garryowen out-half Jamie Gavin who kicked 13 points to bring his tally for the league season to 105. He was on target early on with a sixth minute penalty.

His opposite number Callum Boland responded in the 12th minute and Buccs went in front thanks to a penalty try. They looked like winning the race for a touchdown when Garryowen scrum half Jamie Glynn hauled down an opponent and was promptly sin-binned.

Boland converted the try but on the stroke of half-time Gavin atoned for an earlier miss by landing his second penalty to reduce the arrears to 10-6.

Garryowen regained the lead on 66 minutes with a well-taken try from winger Alex Wootton - his sixth of the campaign - which was followed by another Gavin three-pointer.

The Limerick outfit gained further momentum in the final ten minutes with back-to-back tries from Steve McMahon and Ed Rossiter, both of which Gavin converted, as they edged closer to a possible bonus point.

However, four minutes from the end, Garryowen full-back Lorcan Bourke was sin-binned for a high tackle and Buccaneers responded with tries from Rory O'Connor and Stephen McVeigh, although their efforts were not enough for a losing bonus point.

Dublin University registered their seventh win in their last eight league matches, bagging a bonus point in the process as they hammered UL Bohemians 32-13 on Thomond Park's back pitch.

Bohs had their second row and captain Ed Kelly sent off after 35 minutes for a second yellow card. He was sin-binned on the quarter hour mark and the visitors led 15-6 at half-time.

USA international Tim Maupin got Trinity off to a bright start with a third minute try which Jack McDermott converted, and Maupin's wing colleague Killian O'Leary also touched down in the 22nd minute.

Not surprisingly, Dublin University were in complete control in the second half and further tries from scrum half Angus Lloyd and number 8 Tom Ryan guaranteed their five-point return. The result puts them within four points of the summit now.

UL's only consolation was flanker Ian Condell's fourth try of the campaign, which Shane Airey converted to add to his two first half penalties. 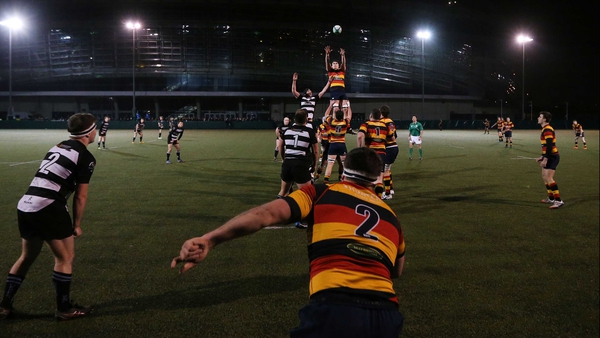