Luke Fitzgerald has backed under-fire Leinster coach Matt O'Connor, saying the players are the ones with something to prove after their Pro12 defeat to Munster.

Leinster went down 28-13 in an unimpressive display against their provincial rivals on St Stephen's Day, and have fallen to fifth in the table, but the Ireland back insists that pointing the finger at the coach is misguided.

"We’ve just had so many bad injuries, it’s been a tough time for Matt,” Fitzgerald said.

“He’s had a real tough time, I feel bad for him. He’s a brilliant coach, a really bright guy, so hopefully we can put in a couple of good performance.

“There’s a lot of respect for him among the player group, so we owe him a couple of big ones. We’re very disappointed with that game against Munster.

“Obviously they deserved it and we’ve no complaints about that, but we’ve a couple of complaints about our own performance. We’re looking to right a few wrongs this weekend against Ulster.”

"We’re looking to right a few wrongs this weekend against Ulster."

Neil Doak's side sit three points above Leinster in fourth following their nervy 13-10 win over Connacht, and Fitzgerald is targeting a win in Saturday's sold-out meeting at the RDS to revitalise his side ahead of a crucial January schedule.

“This next period is really, really important for us, these next four games," he said. "We’re fifth in the league, one behind the team we’re playing at the weekend, so this is obviously a big opportunity for us to move into the top four.

"Then we’ve got those two Heineken Cup games [Castres and Wasps]. It’s a really important period and it’s season-defining at the end of the day. We’ll be judged on this month block, and rightly so.

“It’s up to the players to put in good performances for the coaches, who are working really hard.”

Meanwhile, Ben Te'o (fractured arm) and Fergus McFadden (thumb) have returned from injury to boost O'Connor's options, while Ireland internationals Marty Moore, Cian Healy and Sean O'Brien are closing in on a return to training. 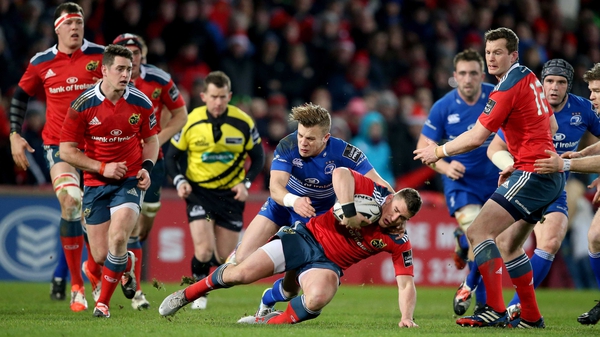