Glasgow came from behind to beat Munster and move above the Irish province in the battle at the top of the Guinness PRO12 table.

All of Glasgow's points in the first half came from the boot of Finn Russell, but after the break Leone Nakarawa and Jonny Gray crossed the whitewash to turn the match around.

The win takes the hosts two points clear of Munster to go top of the standings at least for a few hours ahead of the Ospreys late Saturday clash with Ulster.

A night of heavy rain had been followed by a dry morning so Munster kicked off in perfect conditions to start a first half in which the lead changed hands four times.

First to secure it was Glasgow thanks to a penalty from Russell, who took his first opportunity to put his crucial misses last week against Toulouse behind him.

In what was to be a feature of the half Glasgow made a mess of receiving the kick-off and Munster pounced with Hanrahan dotting down before missing the conversion.

Soon after, Russell missed a long penalty but Glasgow stayed on the attack with centre Peter Horne and then number eight Josh Strauss making inroads until Russell was able to kick a more straight forward penalty.

After 20 minutes Munster captain Paul O'Connell was sin binned by referee Leighton Hodges for a silly penalty as Munster pressed on the Glasgow line.

The makeshift visitors' scrum then won a penalty that Hanrahan struck home, but Russell struck with the boot shortly after to make it 9-8 to Glasgow.

Two debatable decisions from Hodges laid the foundations for Munster to take 18-9 advantage into the break.

Firstly Strauss was penalised for not releasing - when hardly held - and then winger Sean Lamont was pinged for careless footwork at a ruck.

Each time a good Munster position was kicked, with the first resulting in a Hanrahan penalty and the second a try for Copeland with Hanrahan converting.

Glasgow opened the second half brightly but were rebuffed until the 51st minute when play was spread wide from a line out on the visitors' line with Nakarawa getting the touch down and Russell converting to cut the Munster lead to two points.

Munster again immediately benefited from Glasgow's failure to exit the restart, this time Matawalu was the sinner, and were awarded two kickable penalty awards. However Hanrahan was unable to take advantage.

In turn Glasgow's chance came after 70 minutes when sub winger Tommy Seymour's break was backed up by fellow winger DTH Van Der Merwe and the latter was held up over the Munster line.

It merely delayed the inevitable though as Gray managed to power over with a huge effort that went unconverted but was enough to put Glasgow into a decisive late lead. 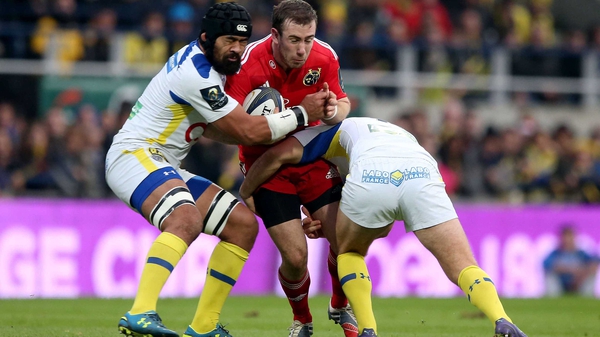