Clermont’s win in Limerick last week was a big one. Just how big is emphasised by the prestigious clubs they joined in winning their Champions Cup round three clash. Only two other sides, Leicester and Ulster, have won in the European Cup at Thomond Park. Both sides went on to contest the European final in the same season - 2007 for Leicester and 2012 for Ulster.

And in negating Munster’s challenge so effectivley Clermont most certainly highlighted themselves as serious contenders to become champions next spring.

Munster are now in a very precarious position indeed in Pool 1. They lie third, with Saracens top on 13 points and Clermont second on 10.

A defeat will leave them trailing both and absolutely needing wins in their last two pool matches: away to Saracens and at home to Sale Sharks. If they were to win both those ties and Saracens are defeated by Clermont they could then sneak through as one of the pools three best runners-up. But of course playing for that would be very dicey and fraught with uncertainty. A victory in Clermont, and two futher wins would put Munster through as pool winners for certain.

So, how do the Irish side get a win in France today? With massive difficulty. Clermont were supreme all over the park last Saturday, bossing the breakdown, tactical kicking, creativity in the backline and just about every other area you could care to mention.

But Munster are also famous for digging out results and doing it against the odds. The Miracle Match, as it’s become known, is perhaps the best example of this. In 2003 they scored four tries and won by 27 points against the side who were at the time English rugby’s top outfit – Gloucester, and as a result qualified for the last eight.

In Clermont they just need a win, no bonus, and if they do, will be in a fantastic position once more to potentially advance from the pool.

Is it too much to ask of Anthony Foley’s side though? Possibly.

To devour Clermont, the basics are going to have to be squeaky clean. A perfect scrum and lineout will give the away team vital possession in a game where they are likely to be deprived of much of that commodity.

At the breakdown, they must clean out far more effectively and quickly, committing less to the breakdown and instead committing more runners in the loose channels either side of the ruck.

Ian Keatley needs a far, far better game where he kicks for the corners regularly, and makes possession count. Errors from place-kicking will also be devastating for the confidence of the pack and potentially could cost the game for either side.

The three-quarters must give far more go-forward ball, and the back three must be brought into the game far more effectively. Perhaps the key missing ingredient for Munster in Limerick though was tactical flexibility. When Plan A doesn’t work, there has to be a Plan B or C, and the men in red showed none last Saturday.

This time, avenues of attack must be far more flexible. Simon Zebo cannot be the only back expected to break the line and take on the ball off every second phase. Andrew Conway, Andew Smith and JJ Hanrahan can all offer Munster options and I predict they will deliver performances that Munster’s fans can be truly proud of.

But, given the supreme quality of Clermont, especially at home, the French team have to start as favourites. They have choked in the past, and it’s up to Munster to put the fear of God into them and make that happen. A fascinating tie awaits. 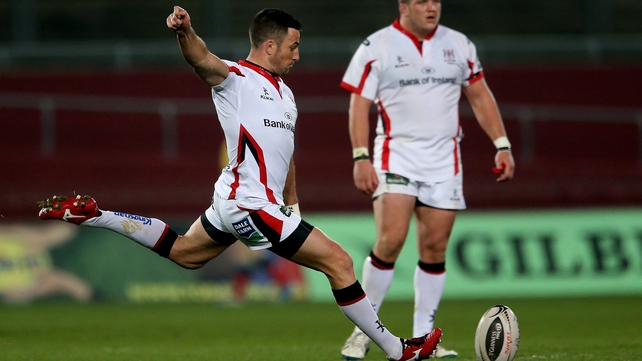 Ulster must win. Whether it’s pretty or ugly doesn’t matter a jot. Four points will keep the Ulstermen contending in Pool 3 and in with a very real chance of reaching the last eight.

With a win in Llanelli they will jump to second in the pool on ten points, three behind Toulon and two ahead of Leicester. A defeat will leave them rock bottom of the pool and dead in the water.

If Ulster can manage that, in round five they will then face the most difficult test in European rugby, an away trip to Toulon. Only the very best of performances is ever good enough in that environment and it will be massive test. A defeat there will leave them scrapping for second spot, needing a home win against Leicester in round six and a bonus point in doing so.

It’s a scandalously difficult group and even if Ulster can pass this Scarlets challenge, then exiting the pool looks a very difficult propositon indeed.

That great escape starts with a win over Scarlets by doing what they do better than any other Irish province at the moment – playing with creativity. From 9-15 they have a backline that purs with ideas and can trouble anyone. Their pack is also hard-nosed with Rory Best, Dan Tuohy, Franco van der Merwe and Robbie Diack all crucial players for them.

And the game will be won in that pack battle. If Samson Lee, Jake Ball, Johan Snyman and Aaron Shingler are kept quiet, the Ulster backline will do a number on the Welsh province. A bonus point would be huge for Ulster given the road they have yet to travel in rounds five and six. But four points would be reward enough from a tricky trip to Wales. It won’t be easy, but Ulster should win this and keep the dream alive, for another round at least.

Verdict: Ulster to win by six.